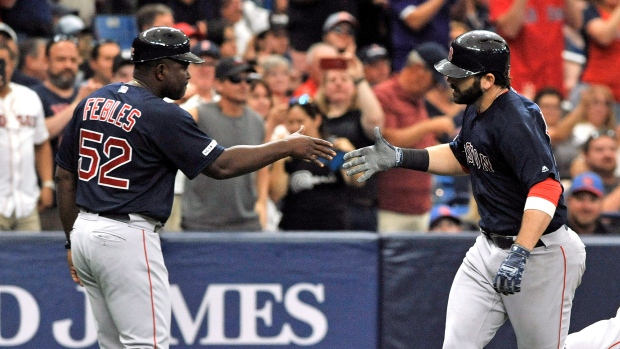 Hold off — for now — on the panic in Boston.

The Red Sox are indeed off to a poor start in defence of their World Series title. They have a 9-13 record and baseball's third-worst run differential. But after sweeping a three-game series with first-place Tampa Bay, Boston has avoided the worst-case scenario early on.

The reigning champs trail the Rays by five games in the AL East, but the deficit could be bigger. Boston ranks near the bottom of the American League in runs scored and ERA. Aside from J.D. Martinez, none of the team's big-name hitters have been great. Chris Sale and Rick Porcello are winless, and both have ERAs over 8.00.

There's still more than a week left in April, though. And there's plenty of precedent that suggests a good team can recover from a start like this. Here are a few teams since the start of the wild-card era that had even worse records than the Red Sox after 22 games — and still ended up in the post-season:

— The 2015 Rangers started 7-15 and were 8 1/2 games out of first place before winning the AL West with an 88-74 record. They were eliminated in the Division Series by Toronto — remember Jose Bautista's home run and bat flip?

— The 2010 Braves were 8-14 after losing nine straight games in April. About a month later, they made up for that with a nine-game winning streak. They ended up as a 91-win wild card in manager Bobby Cox's final season.

— The 2006 Padres were 8-14, but they were only 4 1/2 games out of first at the time. The NL West remained pretty forgiving that year. In fact, when San Diego and Los Angeles finished 88-74, they tied for the second-best record in the whole National League and both made the playoffs.

— The Athletics of the early 2000s had a habit of starting slowly and storming back. The 2002 team featured in "Moneyball" was a good example, but the 2001 team also followed the pattern, starting 8-14 before turning things around and finishing 102-60. Oakland went 58-17 after the All-Star break, and while that wasn't enough to catch the 116-win Mariners in the division, the A's made the playoffs with room to spare.

It's OK to give the Red Sox some benefit of the doubt right now, especially with the rival Yankees dealing with injury issues of their own.

If the Red Sox do continue to flounder, Minnesota is a team that could potentially benefit. The Twins (12-7) rank second in the major leagues in OPS and lead the AL Central by a game over Cleveland. Even if the Indians surge past at some point, Minnesota could remain a factor in the wild-card race.

The A's turned an unusual double play Sunday thanks to Ramón Laureano's athleticism — and his wild throw. Laureano leaped high at the wall to rob Toronto's Teoscar Hernández of a homer. Then Laureano tried to double Justin Smoak off first, but his throw was nowhere near the bag. Smoak tried to go to second, but he was thrown out by catcher Nick Hundley, who had been backing up the play in foul ground.

LINE OF THE WEEK

Christian Yelich is off to a fine start in his race for a second straight NL MVP award. The Milwaukee slugger leads the majors with 13 home runs, and he hit three of them Monday in a 10-7 win over St. Louis.

Information from Baseball-Reference.com was used for this story.