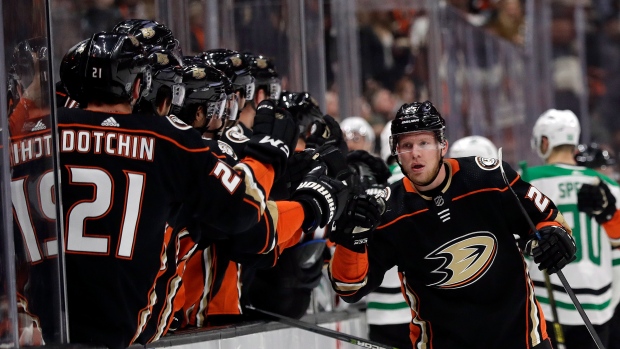 The Boston Bruins have acquired forward Ondrej Kase from the Anaheim Ducks in exchange for David Backes, a 2020 first-round pick and defensive prospect Axel Andersson.

The Bruins retained 25 per cent of Backes' $6 million cap hit through next season in the deal, meaning he will count for $1.5 million against their cap for this season and next.

"We're in it to win it," Bruins general manager Don Sweeney said after the trade.

In 49 games this season, Kase has seven goals and 23 points. He was limited to just 30 games last season due to a concussion and later a season-ending shoulder injury, finishing the year with 11 goals and 20 points.

"Really pleased," Sweeney said of the deal. " A young, talented player...will either play with (David) Krejci or (Charlie) Coyle...adds speed and offensive ability. It addresses a need."

Backes, 35, has not played since clearing waivers in January, and the team announced a short time later he would not be reporting to their American Hockey League affiliate Providence Bruins.

In his 14th NHL season, the native of Minneapolis had been sparingly used prior to be waived, appearing in only 16 games. He has a goal and two assists.

"After speaking with David, we have agreed that it is in the best interest of David and the Bruins for him not to play in Providence at this time," Bruins general manager Don Sweeney said in January. "David is fit and able to play, but in order to preserve all potential options for both David and the Bruins moving forward, we have decided this is the best course of action."

A two-time 30-goal scorer, Backes is signed through next season, but will be paid only $3 million in salary though next season on the five-year, $30 million deal signed as a free agent in 2016.

Prior to joining the Bruins, Backes spent the first decade of his career with the St. Louis Blues.

Andersson, 20, was a second-round draft pick of the Bruins in 2018. He has two goals and 22 points in 41 games with the Moncton Wildcats of the QMJHL.