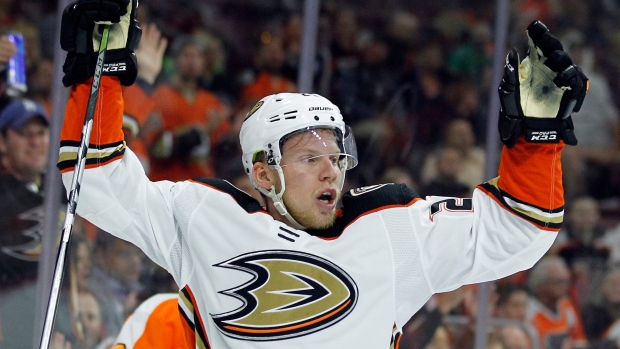 When it comes to the NHL trade deadline, few players will garner more attention than the New York Rangers left winger Chris Kreider.

He currently sits at the very top of TSN’s Trade Bait list, and for good reason – he is a high-end player on an expiring contract that a number of teams could squeeze into their current cap situation.

The Rangers are still oscillating between trading him and signing him, but he’s the most tradable asset on a rebuilding team. Add that to the fact that he’s probably the biggest impact player available right now, and you have a seller’s market setting up nicely for the Blueshirts.

Most teams would improve instantly if they dealt for Kreider. But the fact that his price will likely dictate the market raises an important secondary question: What other potentially less expensive options are out there for teams looking to improve their scoring depth?

For wingers, Anaheim’s Ondrej Kase is perhaps the most intriguing answer.

The 24-year-old Kase – a diamond-in-the-rough seventh-round pick by the Ducks during the 2014 draft – has had a productive, albeit injury-challenged career.

His sophomore season, back in 2017-18, has been the highlight of his career so far, scoring 20 goals and 18 assists in 66 games. But the injury bug has been cruel to the Czech. His 2018-19 season alone included head injuries and season-ending shoulder surgery, a carryover of time he’s lost in prior years.

Betting on a guy with a history of injuries is the ultimate risk/reward, and requires advanced scouting from both your hockey personnel and medical professionals. But the reward side is an intriguing one for a prospective buyer. Those injuries, largely, are the reason why his contract – he makes just $2.6 million per year on a deal that doesn’t expire until 2020-21 – is so attractive.

Plus, Kase has played quite well when he’s been in the Anaheim lineup. The winger has seven goals and 23 points in 49 games this season. Adjusting for usage, his 5-on-5 scoring is fifth-best on Anaheim (behind Adam Henrique, Jakob Silfverberg, Rickard Rakell and Ryan Getzlaf) and on par with Toronto’s John Tavares, Florida’s Mike Hoffman and Calgary’s Matthew Tkachuk.

The scoring is nice, but Kase’s game really shines on the other side of the ice. Anaheim’s defensive numbers with Kase on the ice are impressively positive considering how bad the team is this season, and he is among the team leaders in Corsi%, Expected Goal%, and Scoring Chance%.

While a player like Kreider – again, probably the cream of the crop when it comes to trade options in two weeks – is measured almost exclusively in offensive production, Kase is a reliable two-way type. And when you start bringing in defensive measures, the two players appear rather close in production. (We will use Evolving Hockey’s Goals Above Replacement model to assess player contributions here for quick reference):

In short: on a rate basis over the past three seasons, Kase and Kreider are interchangeable. There is obviously nuance to this sort of question – teams looking for a scoring upgrade would absolutely prefer Kreider, a dynamic offensive talent who has tremendous utility on the power play. And these contributions are all unitized, which helps us make an apples-to-apples comparison, but ignores the fact that one of these two skaters has a rather significant injury history. But don’t overlook the fact that Kase’s lines always seem to get results at even strength, regardless of whether or not he’s the one putting the puck in the net. 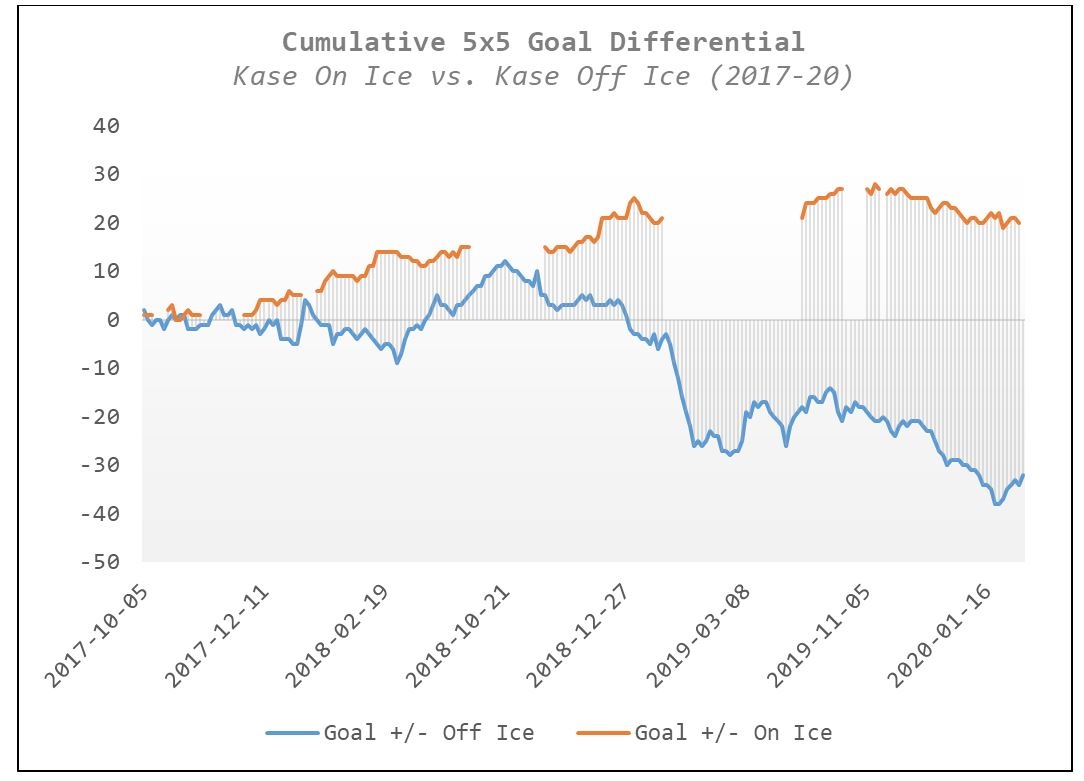 You can see all of the windows where Kase has missed considerable ice time. But whether you are looking at goal differential or measures that are blind to goaltender performance (like expected goals), the conclusion is still the same: The Ducks are a demonstrably better team with him on the ice and that’s been true for a few seasons. And it’s not as if Kase and company are getting bailed out by the brilliant John Gibson. That same Gibson has been behind the Ducks when Kase has been off the ice (our out of the lineup) as well, and there the Ducks are nearly 40 goals in the red over the past three seasons.

Teams at the trade deadline always have a wish list of their targets. Presumably, Kase is on the shortlist for most teams in need of another productive winger. I think he presents an interesting buying opportunity for a team willing to swallow a bit of risk on the injury front.

When Kase has been healthy, he’s been quite good. If he can stay in the lineup, that additional year and a very team-friendly cap hit through 2020-21 makes him one of the most intriguing options come Feb. 24.