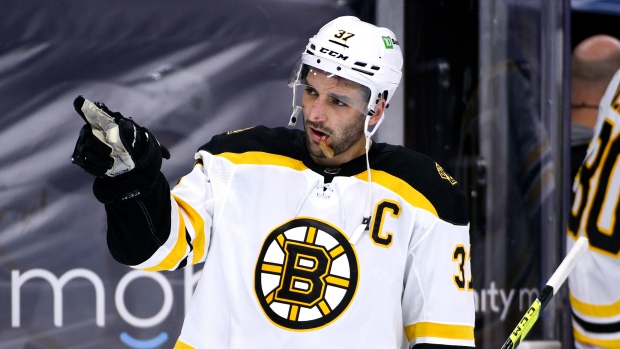 The number of players placed in the NHL's COVID-19 protocol continues to grow, with 22 added on Wednesday.

The Boston Bruins placed captain Patrice Bergeron in the protocol, while the Detroit Red Wings added forwards Robby Fabbri and Michael Rasmussen to the list.

The Washington Capitals announced that forward Evgeny Kuznetsov will be unavailable after being placed in the protocols, while the Florida Panthers announced that Sam Bennett, Radko Gudas, Ryan Lomberg, Brandon Montour, Carter Verhaeghe and one member of the team’s travel party are in protocols and will be unavailable for Thursday’s game against the Los Angeles Kings..

Those moves came in addition to the Calgary Flames adding seven additional players to the protocol, and the Nashville Predators adding six players.

UPDATE: The #RedWings have placed forwards Robby Fabbri and Michael Rasmussen in the NHL's COVID-19 protocol.

Bergeron's addition came one day after the Bruins placed his linemate Brad Marchand and forward Craig Smith in the protocol.

The Bruins are scheduled to visit the New York Islanders on Thursday. The team currently sits fifth in the Atlantic Division with a 14-9-2 record.

Boston played the Calgary Flames, who are currently shut down with nine players in the protocol, on Saturday and were defeated 4-1 by the Vegas Golden Knights on Tuesday.

Bergeron, 36, scored his 10th goal of the season on Tuesday, brining his point total to 23 in 25 games this season. He logged 16:41 of ice time against Vegas.

Fabbri and Rasmussen both played for the Red Wings in their 2-1 win over the New York Islanders on Tuesday.

Fabrri, who signed a three-year contract extension earlier this week, has eight goals and 14 points in 29 games this season.

Rasmussen has three goals and 10 points in 29 games this season, his third with the Red Wings.

#Caps center Evgeny Kuznetsov is unavailable due to the NHL's COVID-19 protocol.

Kuznetsov has nine goals 21 assists in 30 games this season, his ninth with the Capitals.