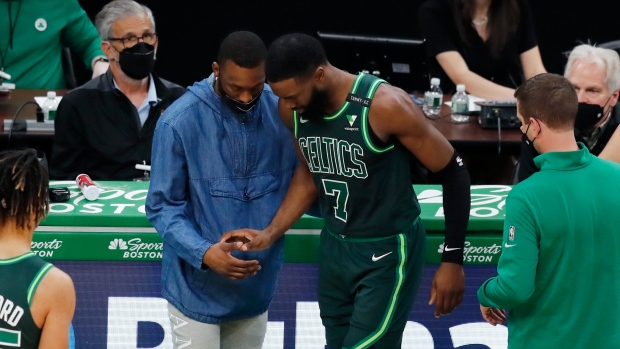 BOSTON — Celtics All-Star forward Jaylen Brown will miss the rest of the season with a torn ligament in his left wrist.

The team said in a statement Monday that Brown learned of the injury to his scapholunate ligament this past weekend and is expected to have surgery later this week.

Brown has missed the Celtics' past three games with a sprained right ankle, which he sustained during a collision with Jayson Tatum late in a 129-119 loss to Portland on May 2. Boston (35-33) has lost two of three since then and entered Monday seventh in the Eastern Conference with four games left.

His injury is the latest blow to a team that was hoping to challenge for the conference title a season after losing to Miami in the conference finals.

Boston has struggled to find consistency as several key players have either been injured or spent extended time in the league's health and safety protocols.

Brown's absence will make it difficult for Boston to avoid the play-in round of the post-season.

He appeared to injure the wrist during Boston's 119-115 loss to Oklahoma City on April 27, but said afterward he was “fine.” It was one of the best games of the season for Brown, who finished with 39 points, 11 rebounds and four steals.

He is averaging 24.7 points, six rebounds and 3.4 assists in 58 games this season. The points and assists are career highs.