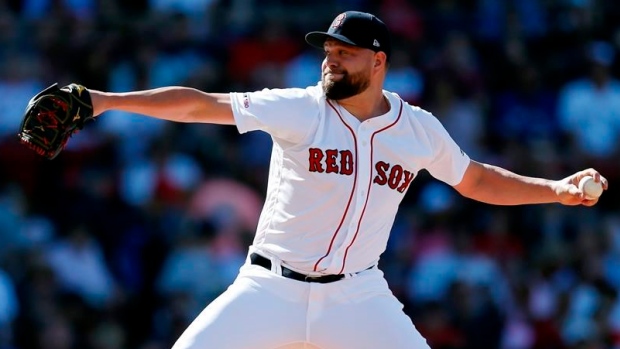 Selected by Boston with the 31st overall pick in the 2012 amateur draft, the left-hander was hit on the face by a line drive that Aug. 18 at Fenway Park in his fourth professional appearance, a Class A game. He sustained multiple orbital fractures.

Johnson recovered and made his big league debut for the Red Sox at Houston on July 21, 2015. He returned to Triple-A for two more starts but his season was cut short by elbow pain. That off-season, he was a passenger in a vehicle that was carjacked at gunpoint. He missed almost two months of the 2016 season due to anxiety and depression.

Johnson made five starts for the Red Sox in 2017 — all wins — and his first opening day-roster in 2018 m when he had 13 starts and 25 relief appearances for a team that went on to win the World Series. He sank to 1-3 with a 6.02 ERA in seven starts and 14 relief appearances last year, was put on waivers, went unclaimed and was sent outright to Pawtucket.

"I would be lying if I said I wasn't caught by surprise," he said.

"I do have a different approach, I guess," said Johnson, who turned 29 in December. "For me, I feel like I did coming into '18. I was a long shot to make the team. All I can do is go out there and do what I can every time I take the ball."

There are spots available in the bullpen and at least one in the rotation on a rebuilding team that dealt left-hander David Price and centerfielder Mookie Betts to the Los Angeles Dodgers.

"Losing David stinks because he's such a good teammate and a good friend of mine and I've been playing with Mookie since 2012," Johnson said. "It wasn't easy to take, but you knew it opened up an opportunity for me."

If he is to win a job, his versatility will certainly be a factor. On Tuesday, Johnson pitched his second scoreless inning during spring training, against Baltimore.

“I think he needs to go about it the same as he's always gone about it," Red Sox interim manager Ron Roenicke said. "The nice thing about him is, we know he can also be a long reliever. We need that and think that's important. With the new three-batter minimum, those left-handed specialists aren't as important as the guy who can go through lineups, whether it's lefty or righty. And two innings, the more we can get relievers to go multiple innings is way more valuable.”