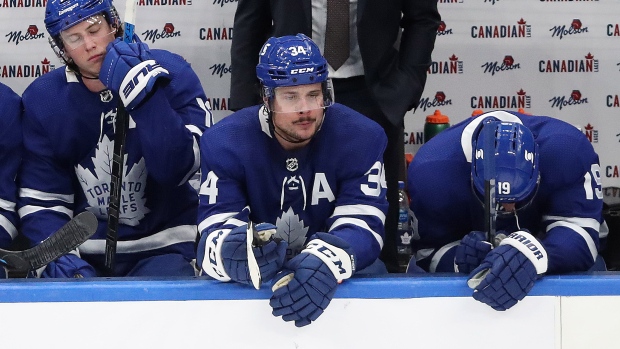 The Maple Leafs’ president and alternate governor was defiant during an end-of-season media availability on Wednesday, doubling-down on Toronto’s enduring championship aspirations amid another shocking playoff disappointment.

“We are not going to stop until we accomplish this. We are going to do this here in Toronto with this group,” said Shanahan of chasing a Stanley Cup. “There’ll be changes that are made, there’ll be tweaks along the way, the team will evolve, the people will evolve. But we are going to get this done.”

That level of success feels a long way off right now. Toronto just blew a 3-1 first-round series lead over the Canadiens in Monday’s Game 7 loss, marking the third time in four seasons the Leafs have been ousted in the opening round. It was Toronto’s most staggering defeat to date, laying waste to a stellar regular season where Toronto won the North Division and was 18 points ahead of Montreal in the standings.

Despite all that, general manager Kyle Dubas echoed Shanahan's sentiment that the future is still bright in Toronto.

“I have full belief that the best days of this journey and for this program are ahead of us,” Dubas said. “If we continue to invest in our people and in our players with player development, with their well-being and their performance, that we will win here, and it's just a matter of continuing to stick to it.”

Those words may continue to ring hollow until Toronto can follow through. The latest defeat raised plenty of questions about what’s next for the franchise, from the sustainability of its expensive core to re-imagining the roster to patching holes that repeatedly capsize the team.

Through extensive interviews with each, Shanahan, Dubas and head coach Sheldon Keefe tried to provide answers on Wednesday about where the Leafs go from here.

Keefe: “There's an identity piece that goes with [killer instinct] and that's something that can be cultivated throughout the season. I thought we had done that, and done a good job of that, in taking control of moments, taking control of games, and clearly it didn't hold up when it counted the most so it's a big area of attention for us going forward.”

Dubas: "What I would say to that with this season's team, when we had ruts, they were able to fully stabilize and then go on a run back the other way and build off of it. And I thought it was the best sign, and that led me to believe that when we got into these moments like we just went through in [Games 5, 6 and 7] that we would be able to capitalize. I regret that we weren't able to deliver on the promise and the hope that our regular season instilled in our fan base. And it's up to us to rectify that so that we don't sit here again and deal with that."

On whether it’s time to dismantle Toronto’s core of Auston Matthews, William Nylander and Mitch Marner

Shanahan: “I think any team in the league would love to have any one of them. But we want them, we like them, we want to keep them here. They're special players. They're all deeply committed to winning here in Toronto, and it's important for us to continue developing them to play in those situations, those ones that they were just in and that they've found themselves in over the last couple of years and come up short.”

Dubas: “Disposing of two players of their calibre because the puck didn't go in the net for them in a seven-game series [is not right]. These are two awfully great young players that showed it over the entire regular season what they're capable of. I have tremendous belief in both of them, and I think they've shown to everybody what they're capable of over time, and I know as we continue to go through these seasons and through these playoffs, that the story will be different for them in the future in terms of the way people speak about them.”

Shanahan: “Those elements I thought that we addressed over the off-season will continue to be important pillars for our team: Defensive play, sticking up for each other, being able to play physically in games where we're tested that way. But I think that those pillars are important for them to get over that hump. And then again it's just a mindset to charge at that door and trying to finally bust it down. It's something that we have to accomplish.”

Dubas: “We’re trying to add as many good players as possible. The onus is on us to continue adapting and adding different elements to the group, and to continue having a deep look here at where we went wrong in the last three games of the series and how we can address it to rectify it as we move forward.”

Keefe: “We really believed in the group that we had this season, the personalities that we had, the experience that we had, the leadership qualities of the individuals and the talents, ultimately. But as you say, it didn't deliver. I think we do believe that it was a big reason for why the expectations were so high because of what we were building through the regular season and the improvements we were making in so many areas of our game that needed to improve if we were going to be a team that would be taken seriously going into the postseason. But it was still not enough.”

Dubas: “I thought over the stretch of the five years [that he played here], Fred did so much for us and took on so many minutes for us and it was one of the reasons why I went out and got Jack [Campbell]. Jack has got probably the greatest work ethic of anyone that I've seen and we’re trying to temper that and have him become more efficient. I think the lesson learned for me is that we have to go out and continually find somebody that can be a good partner, whether that's Fred returning [on a new deal] or somebody else. It’s making sure that we're bolstered on that end to set the goalies up for success.”