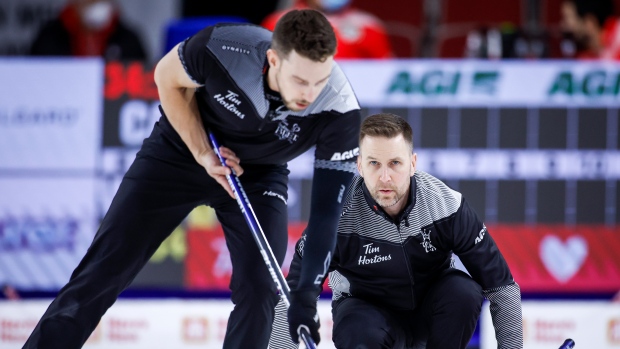 In an effort to avoid distraction, reigning national men's curling champion Brad Gushue was hoping to keep his team's roster developments in-house until after the upcoming world championship.

When reports of Brett Gallant's future plans surfaced Friday, the team decided to issue a statement Saturday confirming he would in fact be leaving the team at the end of the season.

"We had heard rumours previous to the Olympics that he was going to be moving on," Gushue said Saturday. "We've been playing with this and knowing this through the Olympics and through the Brier. So this is not a new thing for us.

"The only difference right now is that it's public."

The news came less than a week after Gushue's St. John's-based team won the Brier and about a month after they took bronze at the Beijing Olympics.

Gushue said Gallant - who's getting married this summer and plans to live in Alberta - told him of his plans last week.

"Obviously it's a bit sad because it's an amazing team," Gallant said. "Three of the best teammates you could ever have. This team is still at the highest level of the game.

"It's a tough decision but I guess all great things do come to an end."

Gallant will be joining a new team, the statement said, adding that Gushue, vice Mark Nichols and lead Geoff Walker will continue next season with a new team member who will be named in the coming weeks.

Gushue, Nichols, Gallant and Walker have won four of the last six Brier titles. They also won a world title in 2017 and 11 Grand Slam titles together as a foursome.

Gallant declined to get into specifics on his future curling plans or how and when he told his teammates the news.

"It's tough conversations, especially when we're still competing and all that stuff," he said. "In the midst of some really (big) highs for our team, it makes the decision that much tougher."

They will represent Canada at the April 2-10 world championship in Las Vegas and then close the season with appearances at two Grand Slam events.

"This past week has certainly been a challenge for all of us," Gushue told The Canadian Press. "But I think we all want the same end goal and that's to play well at the worlds and obviously the Champions Cup and the Players' Championship.

"There's still lots at stake and still three really big events. The timing of this is terrible but that's kind of the culture within the curling community is it all happens after the nationals."

Several top teams on the domestic curling scene - including rinks skipped by Jennifer Jones, Tracy Fleury, Brad Jacobs and Brendan Bottcher to name a few - announced this week that lineup changes would be made after the season.

Also Saturday, teams skipped by John Epping and Matt Dunstone said this will also be their last season with their current foursomes.

Epping and second Mat Camm will continue to play together next season and plan to announce their new teammates at a later date.

The current foursome of Epping, Camm, third Ryan Fry and lead Brent Laing will close out the campaign with appearances at the two remaining Grand Slam events.

"We had a strong run and a lot of fun together during our run as a foursome," Epping said in a team statement.

Dunstone's team announced that all four players - the skip, third Braeden Moskowy, second Kirk Muyres and lead Dustin Kidby - would be going in separate directions. Their next appearance will be at the Players' Championship.