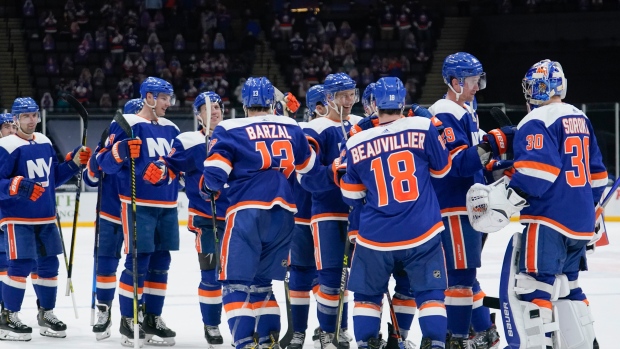 UNIONDALE, N.Y. — Brock Nelson scored in regulation and got the only goal in a five-round shootout to give the New York Islanders a 3-2 win over the Philadelphia Flyers on Thursday night.

Jordan Eberle also scored and Ilya Sorokin made 25 saves as the Islanders won their fourth straight. New York improved to 17-1-2 at Nassau Coliseum, the only team in the league with one regulation loss on home ice.

Nicolas Aube-Kubel and Jakub Voracek scored for Philadelphia, which has lost three of four. Carter Hart made 21 saves.

After a scoreless four rounds in the shootout, Nelson fired a snap shot past the blocker of Hart.

“I didn’t want to try and do anything too fancy,” Nelson said. “I just wanted to get a shot, and it beat him.”

Sorokin made impressive stops on Sean Couturier, Nolan Patrick, Claude Giroux and Travis Konecny in the shootout before denying Joel Farabee to seal the victory. The Russian rookie is 7-0-0 at home and 10-3-1 overall.

“He’s one of the quicker goalies I’ve ever played against, laterally, side to side, he’s really tough to beat,” Eberle said. “He’s an athletic guy, he’s long, he finds a way to be in lanes. I’m not surprised he’s doing so well in the shootout.”

Voracek knotted the score at 2-2 early in the second period with his seventh of the season. The Czech winger beat Sorokin with a wrist shot on the blocker side.

New York controlled the game out of the gate and grabbed a two-goal lead after scoring twice within 63 seconds midway through the first period.

Nelson opened the scoring with his team-leading 15th goal at 6:10 of the first period. Defenceman Ryan Pulock skated into the offensive zone, circled the net and found Nelson near the right face-off circle.

“Not an easy situation to start,” Flyers coach Alain Vigneault said. “We battled back hard, we’re competing, we’re trying every shift, nobody put their heads down. Had a lot of shot attempts that didn’t get through, give them credit, they do a lot of the right things out there defensively and it was a challenge for us.”

Aube-Kubel cut the Flyers’ deficit in half with a long-distance shot that caught Sorokin off guard at 13:53 of the first period.

“We are playing some good hockey,” Flyers defenceman Travis Sanheim said. “Obviously, you want different results. You can get frustrated over that but we don’t really have time for that. We got some big games coming up. We got to continue this, we got to find a way to win hockey games. You can’t look at the negatives right now, we got to find a way to get some points.”

The Islanders missed an opportunity to go ahead by three goals when Flyers defenceman Samuel Morin received a major penalty for boarding and was ejected 14 seconds after Eberle’s goal. New York only generated three shots on the five-minute power play.

The Islanders are 19-3-3 when they score at least three goals (including shootout winners). Under coach Barry Trotz, New York is 85-8-10 when scoring three or more.

The Islanders made the first significant move ahead of the trade deadline, acquiring forwards Kyle Palmieri and Travis Zajac from the New Jersey Devils in exchange for a 2021 first-round draft pick, a conditional fourth-round pick in 2022 and two prospects. Both players made their debuts for New York on Thursday.

“Obviously in the last 24 hours, there was a lot of emotion,” Palmieri said. “A lot going on, but I got to meet everybody this morning, and everyone was so welcoming. To be a part of a team like that that cares about each other and plays for each other, it was evident the second I walked in the locker room. That’s exciting for any player to be a part of.”

The Flyers and Islanders had never met fewer than four times in a regular season until last season, when they only played three times. Their final scheduled meeting was cancelled because of the COVID-19 shutdown. The Flyers went 0-2-1, the first time since the Islanders joined the league in 1972 that they did not pick up at least one regular season win against the Islanders. The teams have played seven of the eight scheduled games so far this season. The series will conclude April 18th in Philadelphia.

The Islanders have two players (Nelson and Barzal) who have active streaks of at least 250 consecutive games, and they are two of 15 players in the NHL whose streaks began no later than the start of the 2017-18 season. Four players — Nelson (284), Barzal (271), Pulock (234) and Josh Bailey (192) — have appeared in every game since Trotz became the Islanders’ coach ahead of the 2018-19 season.