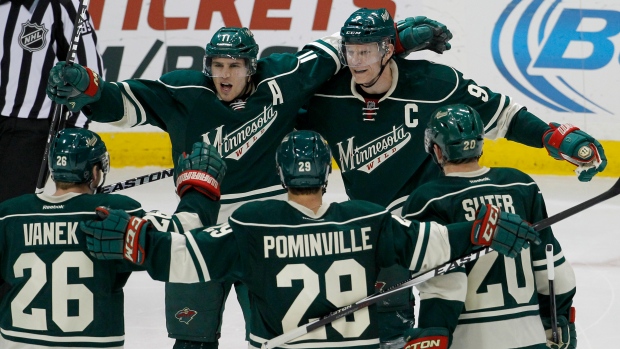 ST. PAUL, Minn. - If the Minnesota Wild are going to bounce back from another December swoon, they'll need Darcy Kuemper to return to his early season form.

"It's been a tough little stretch there, but the break was good," said Kuemper, who started the season 6-2 with three shutouts before struggling in December. "I definitely feel like I'm in a better place mentally right now."

After Cody Franson's 5-on-3 goal tied it at 1 early in the third period, Spurgeon unloaded a slap shot from the right circle to beat goalie Jonathan Bernier and score his first goal in 18 games with 12:17 to play.

Less than 2 minutes later, Koivu scored on the power play to make it 3-1 and give Minnesota its first home win in its past five games.

"We gave up a 5-on-3 goal there and we could've said at that moment, 'Oh, here we go again,'" Wild coach Mike Yeo said. "But it's just one play, either end of the ice. I think that we had that mentality and, more importantly, we executed it. That's what we need going forward."

Brodziak tipped in a pass from Charlie Coyle at 10:14 of the second to give the Wild a 1-0 lead.

Earlier in the second, the Leafs appeared to score, but Mike Santorelli's goal was waived off after the officials huddled and determined that David Clarkson made contact with Kuemper in the crease.

"Obviously from our standpoint and watching the video, he was pushed from behind by Jared Spurgeon," Toronto coach Randy Carlyle said. "Obviously, they saw it different. You don't win those ones. Once they make the call, it is what it is."

Toronto, the NHL's highest-scoring team at 3.29 goals per game, played without forwards Joffrey Lupul, Peter Holland and Nazem Kadri. The three veterans have totalled 57 points this season and were hurt in Toronto's shootout win over Boston on Wednesday.

James van Riemsdyk, Toronto's second-leading scorer, left the game bleeding after taking a puck to the face late in the third, but returned for his final shift.

"We played a pretty solid game on the road, said Bernier, who had 26 saves. "We didn't find a way to score more goals and that was the bottom line. I think we killed too many penalties there."

Minnesota went 4-8 in December and fell to 11th in the Western Conference. The Wild had a similar slump last December, but went 23-10-7 in the new year to reach the playoffs.

"It was huge," centre Erik Haula said. "You look at the standings, just like last year, we got to just keep that going like we did, that we keep playing our best hockey when our backs are against the wall. We were able to do that."

Having Kuemper playing as he did in October is what the Wild need if they're going to put together a run. Since returning from the Christmas break, Kuemper has stopped 85 of 90 shots over three games.

NOTES: Lupul (lower body) and Holland (upper body) were back in Toronto for further evaluation. Kadri, who stayed in the game and scored a shootout goal Wednesday, made the trip to Minnesota, but was scratched and is also expected to miss Saturday's game in Winnipeg with a lower-body injury. ... With LW Brett Sutter out (illness) and LW Jason Zucker missing his fourth game with an illness, Minnesota recalled C Tyler Graovac from AHL Iowa.