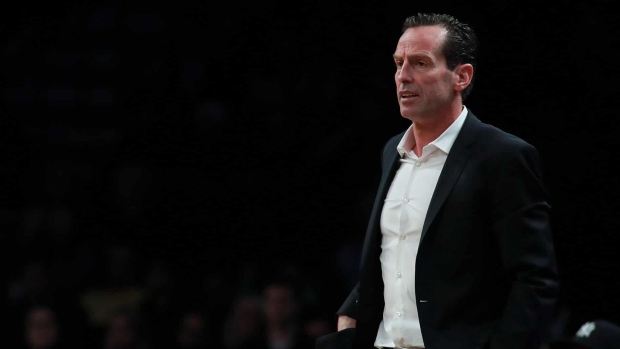 NEW YORK — Kenny Atkinson won't have the chance to coach Kevin Durant and Kyrie Irving together in Brooklyn.

The Nets and their coach decided his influence with the team ran out before that pair could get started.

The Nets surprisingly split with their coach Saturday, even as they remain on track for a second consecutive playoff berth.

The announcement came less than 12 hours after Atkinson guided the Nets to a 139-120 rout of San Antonio. General manager Sean Marks said he and Atkinson had been talking long before that about what was best for the Nets, and they finally concluded it wasn't their fourth-year coach.

“He has taken us to where we stand today and I think the discussions that he and I had were what’s best for the Nets for a variety of different reasons, which I don’t think either one of us will get into,” Marks said. “But it’s time for another voice in the locker room and it’s time that we both part ways.”

Marks offered no specifics but said the decision had nothing to do with Durant, Irving or any other players on the roster.

Rather, he said, it was he and Atkinson deciding that the coach who took the Nets from the bottom of the NBA to the playoffs wasn't the guy who could take them any further — even though Marks said Atkinson had proven himself as an NBA coach.

“But I think we'd both come to realize that it ran its course here and you wish it could have lasted much, much longer, but these are the tough decisions that we both basically have to have,” Marks said.

Marks acknowledged that the decision was surprising, but he called it amicable and believed he, Atkinson and ownership were all at peace with it.

Marks informed the players by text message Saturday morning and then discussed the decision with them at the team's training facility. Players who had been here in previous seasons didn't sense that Atkinson wasn't getting through anymore but also acknowledged that things have changed in Brooklyn this season.

“I think you go across this league and you talk to every coach and every player,” forward Joe Harris said, “and dealing with a young, up-and-coming team is much different than coaching superstar players, and everybody kind of realizes that it’s a much different dynamic. And I wouldn’t say that’s the reason why we’re in this position right now, but it is different.”

Assistant Jacque Vaughn will serve as coach for the rest of the season. He coached Orlando for two-plus seasons, from 2012-15.

The Nets are in seventh place in the Eastern Conference. Atkinson was 118-190 in 3 1/2 seasons of his first NBA head coaching job.

They returned to the post-season last year and are five games clear of ninth-place Washington despite a 28-34 record.

That comes despite only 20 games from Irving and none from Durant, the two superstars they signed last summer to bring heightened expectations to Brooklyn.

But the Nets had ruled out Durant from the start as he recovers from Achilles tendon surgery, and Irving is sidelined for the season after having shoulder surgery.

The Nets had struggled since the All-Star break, with their victory Friday just their second in seven games. Brooklyn was ripped 118-79 at home by Memphis in its previous game.

Atkinson then made a lineup change and the Nets responded against the Spurs with their best offensive performance of the season, putting eight players in double figures.

Atkinson is a Long Island native who had been an assistant coach with Atlanta and New York when Marks hired him as Nets coach in April 2016.

That came with the Nets were mired near the bottom of the NBA as they tried to dig their way out of damage following a 2013 trade with Boston, in which they acquired Kevin Garnett and Paul Pierce but gave up years of assets and salary-cap flexibility.

Brooklyn went 20-62 in Atkinson's first season, 28-54 the next and nothing much was expected last season.

But the Nets surged to a 42-40 finish, earning their first playoff spot since 2015, and Atkinson was credited with helping D'Angelo Russell reach his first All-Star Game, and Spencer Dinwiddie grow from a Development League player to a third-place finisher in voting for the Sixth Man award.

The signings of Durant and Irving brought unprecedented attention since the team moved to Brooklyn in 2012, along with talk of 50-win seasons and contending for titles. Durant mentioned his respect for Atkinson's work as one reason for choosing the Nets after leaving Golden State.

But Irving began having trouble with his right shoulder in early November and eventually had to miss nearly two months, never allowing the Nets to build much chemistry on a roster that had made a number of other changes.

Holdover Caris LeVert was asked if he got the sense that Atkinson wasn't reaching this group the same way.

“I never really did, but you know we had a lot of new guys this year so you never really know how that goes,” he said. “But I know with me, our relationship was extremely strong.”