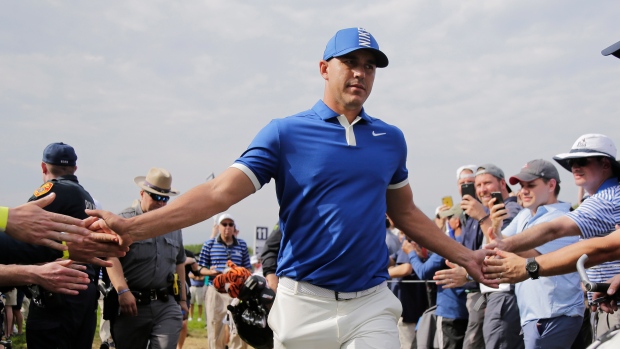 FARMINGDALE, N.Y. — What felt like a battle for Brooks Koepka looked like a runaway Friday in the PGA Championship.

Koepka backed up his record-tying 63 with a round that put him in a league of his own. With three birdies in a four-hole stretch at the start and at the end, the defending champion posted a 5-under 65 that shattered the 36-hole score for a major championship.

More important to Koepka was a seven-shot lead over Jordan Spieth and Adam Scott going into the weekend. That set another PGA Championship record and was the largest at the halfway point of any major since Henry Cotton led by nine in the 1934 British Open.

Just imagine what Koepka could do if he really brings it at Bethpage Black.

"This probably sounds bad," Koepka said, "but today was a battle. I didn't strike it that good. The way I hung in there today and battled it, I think that was probably more impressive than yesterday, not having your 'A' game but still being able to shoot a great score."

Koepka was at 12-under 128, breaking by two shots the record shared at all four majors, most recently by Gary Woodland in the PGA Championship last year at Bellerive.

The dominance should have looked familiar to the throaty gallery on this working man's public course.

Bethpage Black first hosted a major in the 2002 U.S. Open, when Tiger Woods overpowered the course and the field in a wire-to-wire victory.

This time, Woods was merely along for the ride, and it was a short one.

A month after his Masters victory that made him the betting favourite at the PGA Championship, Woods started the back nine with three straight bogeys and never recovered, shooting a 73 to miss the cut for the ninth time in a major.

"I've enjoyed being the Masters champion again, and the PGA was a quick turnaround," Woods said. "And unfortunately, I just didn't play well. As I said, I didn't do all the little things I need to do correctly to post good scores and put myself in position to shoot good scores."

Koepka did everything right, no matter how it felt to him.

Spieth was hopeful of being in contention at a major for the first time since the British Open last summer, and he made key putts for par and a 40-foot birdie putt toward the end of his 66 to get within two shots before Koepka teed off in the afternoon. It was close enough — at the time, anyway — for Spieth to get queried about the missing piece of a career Grand Slam at the PGA Championship.

"If I'm able to put some good work in tomorrow, I will be in contention on Sunday. And at that point, it will be just more of trying to win a golf tournament," he said.

His goal was to stay in range, and Spieth felt he did enough.

He really poured it on at the end as Scott and Matt Wallace of England moved closer.

On two of the strongest holes in the finishing stretch, Koepka mashed a drive down the middle of the 15th fairway and hit 9-iron to 3 feet, one of only 10 birdies from 155 players in the field. He hit wedge into 5 feet on the 473-yard 16th hole for another birdie, and the record was in sight.

He finished with a wedge out of thick grass right of the 18th fairway, pouring in a final birdie from just inside 12 feet. It was his 14th birdie of the week.

Koepka plays a game with which Woods is familiar — a younger version of Woods, anyway.

"Relative to the field, I was about that long early in my career," the 43-year-old Woods said. "When you're able to hit the ball much further than other players, and get on the right golf courses where setups like this is penalizing if you are a little bit crooked, and if he does miss it, he misses on the correct sides, and he's far enough down there to where he was able to get the ball on the green and he did all the little things right.

"He had the good angles. He missed the ball in the correct spots, and it adds up to a big lead. And as I said, there's no reason why he can't increase this lead."

That's what Koepka has in mind.

"I'd like to see that lead grow as large as it possibly can," Koepka said. "I still have to go out there and do what I'm supposed to do, keep putting the ball in the right spot and make sure that you don't make any double bogeys, and I should have a good chance of winning the championship."

Scott, who pushed Koepka all the way to end at the PGA last year in St. Louis, ran in putts from 25 feet, 40 feet and 30 feet on the opening three holes — only to settle for par on the easiest hole at Bethpage Black at the par-5 fourth — and was 7 under with four holes to play, a chance to break the PGA record of 63 that Koepka had matched the day before.

That ended when Scott missed a 2-foot par putt on the 17th, and he had to get up-and-down from the fairway for par on the 18th.

And then he saw what Koepka was doing.

"I have to post two more good ones by the look of it at this stage," Scott said.

Everyone needs help from a player who has won three of the last seven majors and was runner-up in the last one at Augusta National.