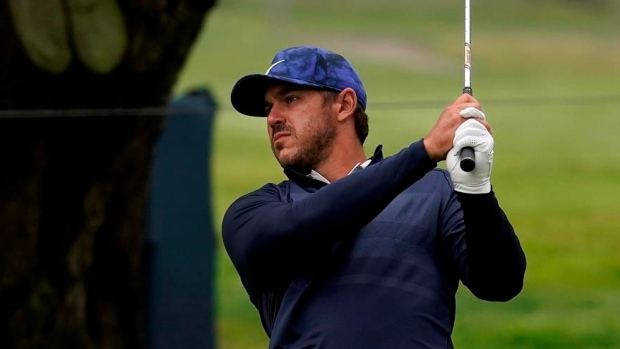 When the hulking golfer pulled out of the Northern Trust in August, he described his injury as something in his “lower body,” leaving all to guess just what was causing his pain and poor play.

Now, after eight weeks of rehab and recovery, he’s come clean. Ahead of this week’s CJ Cup in Las Vegas, Nev., Koepka revealed that he suffered injuries to both his knee and hip. The latter, admitted the four-time major winner, was caused when he compensated from pain in the former.

The knee injury came last year, and he underwent a stem cell procedure on it right after the Tour Championship. He returned to play at last year’s CJ Cup in October, but slipped on wet pavement in his spikes and re-injured his patellar tendon. That led to a three-month layoff.

When he returned to play, he still wasn’t able to fully transfer his weight onto his left side and that accentuated the hip problems, which were later diagnosed as a torn labrum.

While trying to play through the pain, Koepka revealed that had a cortisone shot in his hip in Boston before withdrawing from the Northern Trust and the rest of the FedEx Cup playoffs.

Three weeks ago, he underwent a platelet-rich plasma (PRP) injection to try and heal the injury. He has been rehabbing in San Diego for much of the past two months and began hitting balls about 10 days ago.

“I didn't know how bad I felt,” he stated, “until I actually feel good. It’s good to be back.”

In the short time that he did play with the injuries, his game was very un-Koepka like. He missed three cuts, managed a tie for second at the World Golf Championship-FedEx St. Jude Invitational and shot a final-round 74 to fall out of contention at the PGA Championship. He’s fallen from top spot on the Official World Golf Ranking at the end of 2019 to 11th, finally dropping out of the top 10 last week.

While he never blamed injury as the reason for his poor play, it was clear he was limited in his swing. His accuracy off the tee was poor and he showed some awkwardness throughout his play. During the PGA Championship, he received mid-round treatment from a therapist that targeted his hip. At the time he downplayed that therapy and all his swing restrictions, but he finally admitted it took a toll on his game.

“It’s the whole reason I played like crap,” said Koepka

But all that is behind him and he’s ready to begin a run that will target the Masters in a month’s time.

“I feel good now, so I'm just pleased to finally feel good,” he stated. “Still got a couple events and then Augusta.”

Koepka’s schedule has him playing this week, two weeks off during which he’ll return to San Diego for more treatment, and then head to the Houston Open before the Masters.

Koepka finished at 12 under at last year’s Masters, a shot back of Tiger Woods and his miracle win.

As for this week, Koepka hasn’t lost any of his confidence despite the injuries and the layoff.

“I know physically I'll be able to play four rounds, walk four rounds and have no issue with it,” he said. “From there, it's just go out and win.”