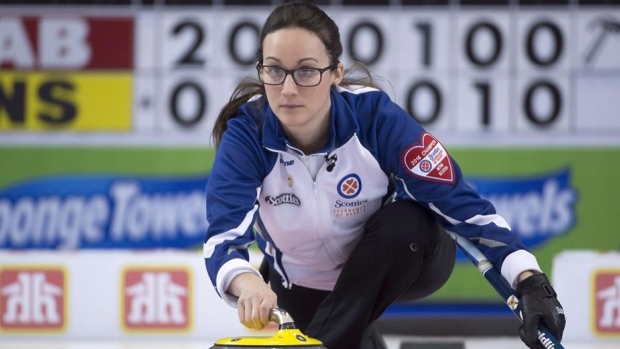 Jennifer Jones already has her Scotties ticket. Rachel Homan will be in Sydney too.

Now you can lock in big names like Chelsea Carey, Tracy Fleury and Kerri Einarson for the national championship as well after a wild day at provincial playdowns across the country.

Jill Brothers will be the host team at the Feb. 15-24 Scotties Tournament of Hearts at Centre 200 after a 6-5 win over Mary-Anne Arsenault in the Nova Scotia final on Sunday morning in Dartmouth.

Brothers stole two points in the 10th end to knock out the five-time national champion.

Later on, Fleury outscored Einarson 13-7 to win the Manitoba final at Gimli. Fleury gave up a rare five-ender in the second end but pulled even in the sixth, added a deuce in the eighth and stole three points in the ninth when Einarson missed both of her throws.

Einarson, who sits No. 2 in the Canadian Team Ranking System, settled for a spot in the win-and-you're-in wild-card game before pool play begins at the Scotties.

In Stettler, Carey secured the Alberta title by hitting a brilliant triple-takeout to score four points for an 8-3 win over Kelsey Rocque.

Robyn Silvernagle won the Saskatchewan crown in Humboldt by scoring a single in the 10th end for a 6-5 win over Sherry Anderson. Andrea Crawford was victorious in New Brunswick after doubling Sarah Mallais 6-3 in Moncton.

Homan is guaranteed a spot in the wild-card game unless she wins the Ontario championship on Saturday. If she does, Einarson would likely face Casey Scheidegger, who made an early exit from the Alberta playdowns.

Northern Ontario and British Columbia will hold their women's playdowns over the next week.

The national men's curling championship is set for March 1-10 at Westoba Place in Brandon, Man.

Wild-card teams were added to the national championships last year. Einarson beat Carey in the 2018 women's play-in game and made it all the way to the final.

Homan, meanwhile, was supposed to be Team Canada at the Scotties last year, but had to decline the berth after winning Canada's Olympic spot for the Pyeongchang Games.

Curling Canada announced last fall that Homan would get to play in this year's wild-card game if she didn't directly qualify by winning her province. As it turned out, Homan would be assured at least a wild-card spot anyway because of her healthy lead atop the CTRS list.

Eighth-place Darcy Robertson of Manitoba would be Scheidegger's closest challenger (185.007) since No. 6 Fleury and No. 7 Silvernagle locked up berths.

B.C., Ontario, Newfoundland and Labrador and Northern Ontario will hold their men's playdowns over the next week. Alberta, Manitoba, Yukon, Saskatchewan and the Northwest Territories are on tap the week after.