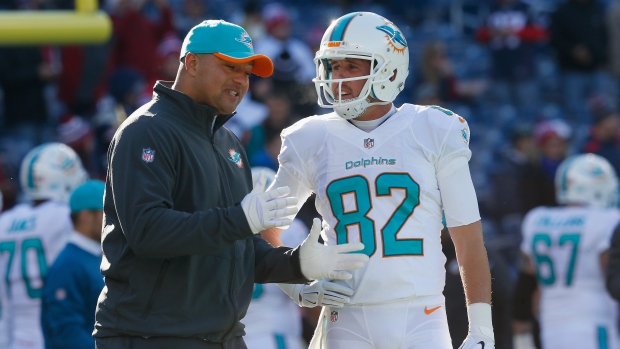 CLEVELAND - Brian Hartline's outlook wasn't exactly positive before he visited the Browns as a free agent.

"To be frank, I didn't expect a whole lot," the wide receiver said.

That quickly changed when he walked through the team's remodeled facilities, met Cleveland coach Mike Pettine and heard the plan to turn around a team that was in the playoff mix last season before collapsing.

Hartline liked what he saw and heard.

"It just felt right," he said. "At some point, your gut is just kind of there and it was one place that I was definitely interested in being."

A dependable pass catcher for six seasons in Miami, Hartline signed a two-year, $6 million contract on Tuesday with the Browns, giving the team a rangy target to help offset the indefinite loss of Josh Gordon.

It's a homecoming for Hartline. The 28-year-old grew up in Canton, played at Ohio State and is very familiar with the Browns' storied and stained tradition. Hartline knows about the losing seasons, quarterback controversies, the playoff drought. All he can do is try to make them memories.

"I guess there is a point where the past is the past," he said. "It doesn't really matter. It's all about seeing the future and where things are going. I'm not going to choose a place based off of where they've been. It's obviously important to have a good track record. But to me, I believed in the vision in Cleveland."

Hartline's signing became official a few hours before the opening of free agency. With more than $40 million of salary cap space, the Browns figure to be aggressive but coach Mike Pettine cautioned the team will not overpay, sticking to a "right player, right price" policy.

The Browns have pressing needs, including on their defensive line if Jabaal Sheard and Ahtyba Rubin — two starters last season — sign elsewhere. Cleveland had hoped to sign versatile cornerback Buster Skrine, but he agreed to terms on a four-year contract with the New York Jets, a person speaking on condition of anonymity told the Associated Press.

Hartline outlined some of the Browns strengths: a solid defence and offensive line he called, "really well put together, if not top in the league."

To Hartline, though, the Browns' biggest selling point is Pettine.

"He's a man's man, straight to the point, loves football, wants to win," Hartline said. "He was easy to talk to. He's got an AFC East background so we kind of talked about crossing paths in the past. He was one of the main reasons why I believed in his vision and where he wants to go and what's the kind of team he wants to build. He's a major part in wanting to be here."

Hartline had consecutive 1,000-yard seasons in 2012 and 2013 for the Dolphins, who released him last month. His production dropped to 474 yards in 2014, but the Browns needed quality depth after Gordon, who led the league in yards receiving in 2013, was suspended one year for multiple violations of the substance abuse policy.

"Brian is an excellent teammate," Browns general manager Ray Farmer said. "He's a crafty and savvy player with very good hands and is a precision route runner. His size, hands and route running make for a good combination and he is going to help us at that position."

His addition could impact the Browns' plans in the upcoming draft. Cleveland owns a pair of first-round picks and it's possible the team could use one on a top-flight receiver after passing on players like Sammy Watkins, Mike Evans and Odell Beckham Jr.

As for the Browns' convoluted quarterback situation, Hartline defended recently signed veteran Josh McCown, who went 1-10 last season for Tampa Bay and isn't seen by most Cleveland fans as anything more than another stop-gap measure in the team's never-ending quest for a franchise QB.

On Monday, Pettine said he would be comfortable with McCown as his starter. Hartline believes McCown can win, too.

"To me, he is that quality guy," he said. "From what I understand, he has been in the league 12 years and has had 12 different OCs (offensive co-ordinators). Any guy that can perform at all under that kind of pressure and that kind of change is pretty impressive to me. I know he's looking forward to establishing some roots here in Cleveland and I am excited to work here with him.