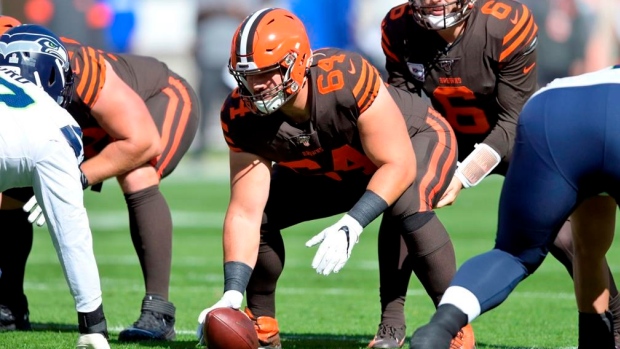 CLEVELAND — While they wait for quarterback Baker Mayfield to develop, the Browns are confident they have the right guy giving him the ball every play.

Cleveland signed steady centre JC Tretter to a three-year, $32.5 million contract extension on Friday, locking him up before he considered leaving as a free agent.

Tretter's deal includes $23 million guaranteed. He was in the final year of a three-year, $16.75 million contract he signed two years ago, and the Browns didn't want to risk losing him.

"I think anybody wants to feel at home and wanted and I think that's one of the best feelings is that you can settle in and make Cleveland your home and have that franchise that you have the ties to and not have to move around to three teams," Tretter said. "That's really one of the best feelings for me is just knowing now I can be a Cleveland Brown and be happy about that."

Tretter has started all 40 games — and not missed one play— since signing with Cleveland as a free agent before the 2017 season. The 28-year-old, who spent his first three NFL seasons with Green Bay, has helped solidify a Cleveland offensive line that lost 10-time Pro Bowl tackle Joe Thomas before last season and has struggled this year.

"JC Tretter embodies all of the qualities that you look for in a football player," Browns general manager John Dorsey said. "He's smart. He's tough. He's physical. He's a hard worker. He's a leader and not just in the offensive line room, but for our entire football team. We are very excited to have JC remain a Cleveland Brown for years to come."

Tretter didn't miss a snap last season despite playing with a severely sprained ankle, which limited his practice time and required daily treatments. With Tretter anchoring the middle, Cleveland's line did a solid job protecting Mayfield. He was only sacked five times in the final eight games.

NOTES: Starting DE Olivier Vernon will miss Sunday's game with knee injury sustained last week in Denver. "He is a leader on defence, but we have some guys behind him that we are expecting to go in and play well," Kitchens said. "They will get a chance to show what they can do." ... TE Ricky Seals-Jones (knee) didn't practice, and is questionable.