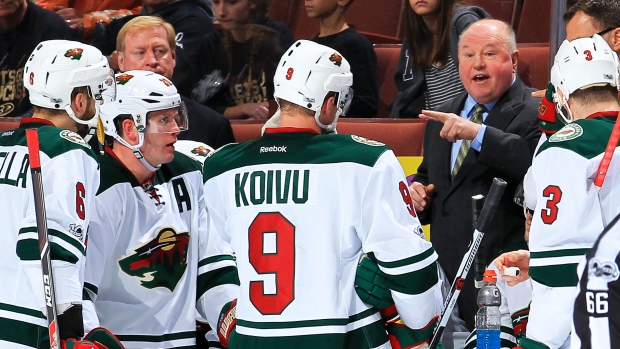 The Wild blew a two-goal lead in the third period of their shootout loss to the New York Rangers on Thursday, but had won four of their five games prior. Boudreau admitted to Russo he did not take the news well on Friday morning.

“It was funny because Bill came in and he shut the door, and as soon as he shut the door, I knew,” Boudreau said. “You just know, right? And he says, ‘I’m going to make a change,’ and I instantly said, ‘Are you firing me?!’ — just like that.

Boudreau was coaching in the final year of his contract and said Sunday he entered the season expecting to be let go at some point after Guerin was hired in the summer because “all GMs want their own coach."

However, the timing last week caught him by surprise with the Wild owning a winning record and closing on a playoff spot.

“I didn’t know if it would at the beginning of the year, Christmastime, the middle of the year or the end of the year," Boudreau said. "But, I thought we were playing really good and when you’re into the second week of February, I just figured I was safe ‘til the end.”

Boudreau finished with a 158-110-35 record in four seasons behind the bench with the Wild, bringing his career record to 567-302-115 in 984 games as head coach of the Washington Capitals, Anaheim Ducks and Wild.

The 65-year-old made it clear Sunday that he plans to coach again in the NHL, and has no plans to wait.

“If I could coach yesterday, I’d do it,” Boudreau said. “I get mad, and instead of feeling sorry for myself, I want to get right back into it. In the past, I’ve gotten lucky that I got back into it right away. When I came here four years ago, I hoped this was my last job. I hoped to be here 10 years. It didn’t work out that way, but I know I can still coach.”

The veteran head coach said he's hoping NHL teams can look past his age with several jobs set to open this summer.

“I don’t feel old. I feel young,” Boudreau said. “It’s not like you’re old and you don’t have energy. I’m the first one at work every day, I go in every day on off-days, I’m doing this all the time, thinking hockey all the time, so I feel very young. And anytime you go to a new job, you’re rejuvenated and you work harder.”

The Wild fell 2-0 to the San Jose Sharks on Saturday night in their first game since parting ways with Boudreau. Minnesota will visit the Vancouver Canucks on Wednesday.