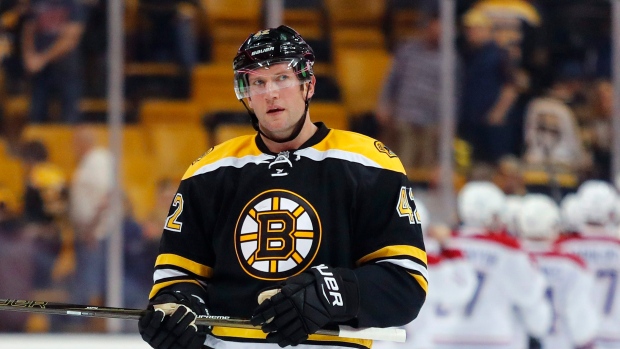 Boston Bruins forward David Backes is set to undergo surgery on his colon on Thursday and will miss two months as he recovers.

Backes, 33, was diagnosed with diverticulitis before the start of the season. He made his season debut on October 19 and posted one assist in five games with the team.

Team internist Dr. David Finn released a statement Wednesday which said Backes did not put his health at risk by playing this season, but the surgery will remove the part of his colon causing him repeated bouts with the illness.

"David Backes will undergo surgery on Thursday, November 2 to remove a portion of his colon," Dr. Finn said. "The expected recovery time is approximately 8 weeks. The decision to have surgery was made in consultation with team physicians as well as outside specialists in the management of diverticulitis. David's episode of diverticulitis at the beginning of the season was his second episode in two months and was complicated with an abscess (collection of infection adjacent to the colon) that required drainage.

"Repeated episodes, like what David experienced, have a very high likelihood of recurrence in the near term, which is why he was advised to have surgery to remove the area of colon causing the problem. It was determined that attempting to delay the surgery until after the season was an unacceptable risk to his health.

"David was cleared to play in the team's games on October 19 while waiting for his colon to properly heal from the most recent episode of diverticulitis which sidelined him for the first five games of the 2017-18 season. David was at no additional risk while playing during this period, and he is having the surgery as soon as the medical team felt comfortable moving forward with the operation."

The Minneapolis native scored 17 goals and posted 38 points in 74 games in last season, his first with the Bruins. He added one goal and four points in six playoff games.

Backes, a veteran of 801 NHL games, signed a five-year, $30 million contract with the Bruins last July. He owns a no-move clause for two more seasons and then owns a modified no-trade clause in the final two years.