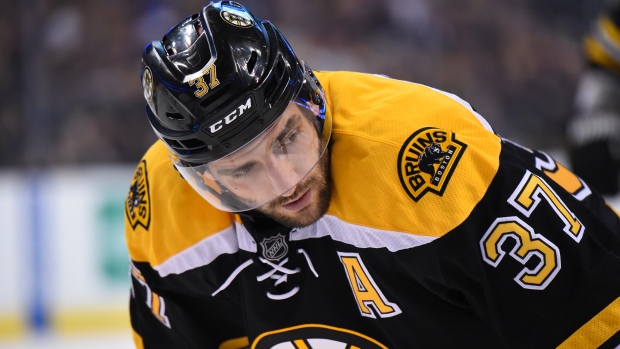 Boston Bruins forward Patrice Bergeron is without a timeline for returning to the lineup after fracturing his right foot while blocking a shot Saturday night.

The Bruins announced Tuesday Bergeron sustained the injury against the Toronto Maple Leafs on Saturday and said Bergeron will be re-evaluated in two weeks.

X-rays after the loss to the Leafs were negative and Bergeron played against the Buffalo Sabres on Sunday, logging 17:59 of ice time. He had a CT scan on Monday that revealed the damage.

The 32-year-old has 27 goals and 54 points with a plus-26 rating in 55 games with the Bruins this season. He had been considered the favourite for the NHL's Selke Trophy, awarded to the forward who best excels in the defensive aspects of the game.

“It’s gonna hurt... but we’ve been through this early in the year with guys stepping up. Not one guy will replace Bergy,” Bruins head coach Bruce Cassidy said Tuesday.

Most relevant information on any given day from here on in is how many weeks until the playoffs begin. Today, that would be six weeks. Single biggest news items post trade deadline and pre playoffs are the injury reports. Day to day? 2-4? 4-6? And the dreaded “indefinite.”

Gionta, however, will be a healthy scratch on Tuesday night as Tommy Wingels, acquired Monday from the Chicago Blackhawks, draws in on the third line. Wingels missed Tuesday's gameday skate.