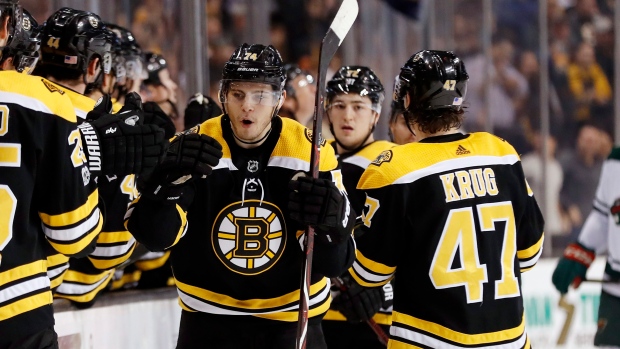 They followed that with their best period of the season.

Jake DeBrusk and Frank Vatrano each scored a first-period goal off a Wild player's skate, and the Bruins held on for a 5-3 win Monday night and their third victory in the last 11 games against Minnesota.

"The plays are not going to be pretty every time," Boston captain Zdeno Chara said. "Sometimes not the pretty one is effective."

Sean Kuraly and Torey Krug both scored in the second for the Bruins, shut out in two matchups versus Dubnyk last season.

Chara and Jordan Szwarz each had two assists as Boston solved Dubnyk early this time. He was pulled after facing 24 shots in two periods.

"A couple of tough bounces there to keep it down 2-1," Dubnyk said.

Tuukka Rask stopped 24 shots for Boston, including a right-pad save on Mikael Granlund's penalty shot with 13:05 to play.

"We played a very solid game in that second period especially," Rask said. "We created a lot of offence the right way and it paid off."

Eric Staal, Nino Niederreiter and Granlund each had a goal for the Wild, who lost consecutive games in regulation for the first time this season.

Staal scored a short-handed goal on a clean breakaway with 4:04 left to cut it to 4-3, but the Bruins held on for their second win in five games.

Minnesota pulled its goalie with about 2 1/2 minutes left and Tim Schaller wrapped it up with an empty-netter in the final minute.

After the Wild took a 1-0 lead on Niederreiter's goal 4:53 into the game, the Bruins finally found a way to score against Dubnyk by getting two just more than two minutes apart midway through the period.

DeBrusk tied it at 10:23 when his shot caromed into the net off the skate of Wild defenceman Ryan Suter.

Vatrano gave Boston the lead for good when he fired a shot from the top of the left circle that hit the post, bounced off the back of Dubnyk's left skate and into the net.

"Sometimes the hockey gods are with you and they were with us tonight," Vatrano said.

And the Bruins didn't stop there.

"The first shift wasn't good," Boston coach Bruce Cassidy said. "I think it was probably our best period all year if you take away that first 20 seconds."

In the second, Minnesota's Mikko Koivu missed an excellent scoring chance when he lifted a backhand that hit off the crossbar in the opening minute.

The Bruins then took control when Kuraly and Krug scored a little more than two minutes apart early in the second.

"We got a couple in the third, but when you're down as many as we were it's tough to come back," Staal said.

The Bruins dominated play for most of the second, holding the Wild to one shot on goal in the opening 15 1/2 minutes and only four in the period.

Granlund was awarded a penalty shot after he was tripped by Krug near centre ice.

NOTES: Dubnyk stopped 52 shots against the Bruins last season. ... Boston forward Brad Marchand was out with an upper-body injury and C David Krejci, sidelined since Oct. 19 with an upper-body injury, was placed on injured reserve. ... In honour of Military Appreciation Night, the Bruins wore camouflage jerseys during their pregame skate and seven players each purchased $2,500 worth of tickets to give to local military members and their families. ... The Wild just completed their longest homestand of the season at 3-3. ... Staal had 36 points (16 goals, 20 assists) in 46 career games against the Bruins. ... Boston recalled D Rob O'Gara from Providence of the AHL before the game.

Wild: At the Toronto Maple Leafs on Wednesday, the second stop on a four-game road trip that marks their longest of the season.

Bruins: At the New York Rangers on Wednesday, only Boston's fourth game against an Eastern Conference team this season.