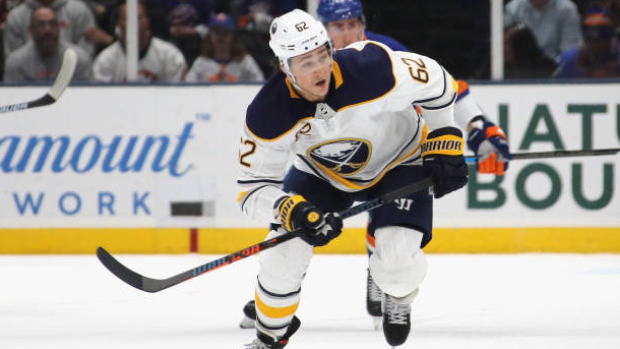 The Buffalo Sabres updated the status of Brandon Montour Wednesday, announcing the defenceman will miss three-to-four weeks due a hand injury.

Montour was ruled out for the remainder of the preseason on Sept. 19 due to the injury. He was acquired by the Sabres from the Anaheim Ducks last season and posted eight goals and 35 points in 82 games with the two teams.

The 25-year-old has 19 goals and 73 points in 189 games since being selected second overall in the 2014 NHL Draft. He is scheduled to become a restricted free agent next summer and carries a cap hit of $3.39 million for this season.

Bogosian, 29, had three goals and 19 points in 65 games with the Sabres last season. He is also entering the final year of his current contract and carries a $5.14 million cap hit for this season.

Luukkonen, 20, is entering his first season of professional hockey after appearing in 53 games last season with the OHL's Sudbury Wolves. He appeared in one game with the AHL's Rochester Americans last season, allowing two goals on 34 shots.