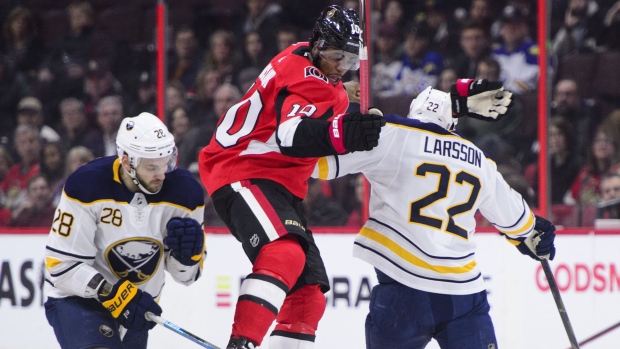 The Buffalo Sabres have issued qualifying offers to their most high-profile restricted free agents, including forwards Zemgus Girgensons and Johan Larsson, a person with direct knowledge of the decisions tells The Associated Press.

The Sabres also issued offers to retain the rights of defencemen Jake McCabe, goalie Linus Ullmark, and forwards Evan Rodrigues and C.J. Smith, the person said only on the condition of anonymity because the team had not released this information.

Larsson has six seasons of experience with the Sabres, while Girgensons was Buffalo's second of two first-round picks in the 2012 draft. Both have been used in secondary roles.

Ullmark finished with a 15-14-5 record in 35 games during his first full season in Buffalo while splitting the goalie duties with veteran Carter Hutton.

McCabe has played mostly a top-four defensive role during his four full seasons with the Sabres. He is a dependable defenceman who scored a career-best-matching four goals, and added 10 assists in 59 games last season.