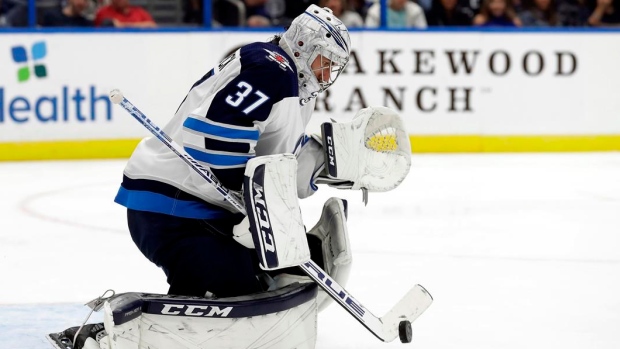 The Winnipeg Jets are 4-1-1 in November and a lot of their success can be attributed to the consistent goaltending of Connor Hellebuyck.

"He’s won us some games single-handedly, he’s given us a chance to be in a lot of games and he’s confident in the net," defenceman Josh Morrissey said of his goaltender to the Winnipeg Free Press. "He worked hard during the summer, he’s in great shape, he works hard in practice, so we’re definitely really confident having him in the net."

Hellebuyck has compiled a .937 save percentage and 2.14 goals-against average though six starts this month. His play has helped the Jets hang onto to the third divisional playoff spot in the Central Division through Nov. 18.

Hellebuyck has allowed two or fewer goals in 10 of his 16 starts this season.

His October was also impressive. His .921 save percentage in the first month of the season was enough to pick up a 5-5-0 record.

It's a true return to form for a goaltender who struggled last season despite his team performing well.

Currently in the second year of a six-year, $37 million contract, Hellebuyck's .913 save percentage in 2018-19 had him tied for 24th among goaltenders who played in at least seven games.