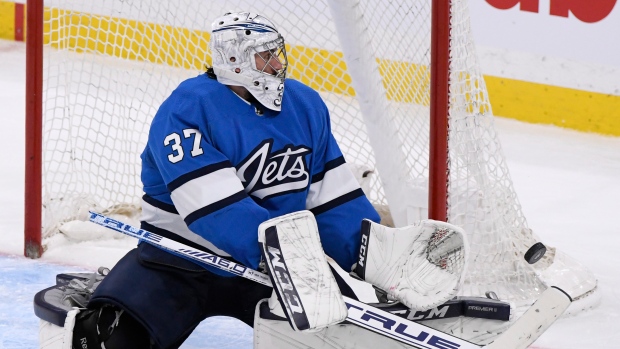 There have been lots of scoring chances in Winnipeg Jets games over the first month of the season, but they’re largely happening at one end of the ice.

There is a good argument to be made that Jets goalie Connor Hellebuyck – and his 93.0 save percentage in the first month of the year – is the team’s most valuable player. Despite Winnipeg’s respectable 10-7-1 record to start the year, it certainly feels as though the team’s win-loss record is a bit on the flattering side.

Put aside the fact that the team has a negative goal differential and consider some of the other key performance indicators for this team:

At the surface level, it seems as though Winnipeg is becoming this year’s version of a team that gets marginally outplayed territorially on most nights, but has a goaltending advantage that acts as a bit of a neutralizer.

Of course, the special-teams numbers on top of the shaky even-strength play creates a tough situation for Paul Maurice and the rest of the coaching staff.

The good news is that Winnipeg isn’t being routinely outshot so far this season – the Jets are 42 shot attempts in the red, which amounts to a disadvantage of 2.5 per game. You would like to see more time in the offensive zone and less away from Hellebuyck’s end of the ice, but it’s not as if this type of performance is going to unilaterally sink a team.

But the mantra of “not all shots are created equal” certainly applies to this Winnipeg roster, and it manifests in the data.

Winnipeg’s expected goal numbers – which take into consideration both the volume of shots on the ice and the quality of those shots based on distance, angles, shot types, et al. – are substantially worse. In fact, the delta between Winnipeg’s expected goal rates and shot rates is a massive outlier within the league. No team has a differential even half that of the Jets.

You can see this in the expected shooting rates for Winnipeg on a game-by-game basis. Not only does Hellebuyck tend to see proportionally more shots from the interior and the slot, but Winnipeg’s offence has tremendous difficulty piercing the interior of the opposition’s defence.

Add the big quality disadvantage to a small volume disadvantage, and you see why there are concerns about this team’s immediate future, irrespective of record: 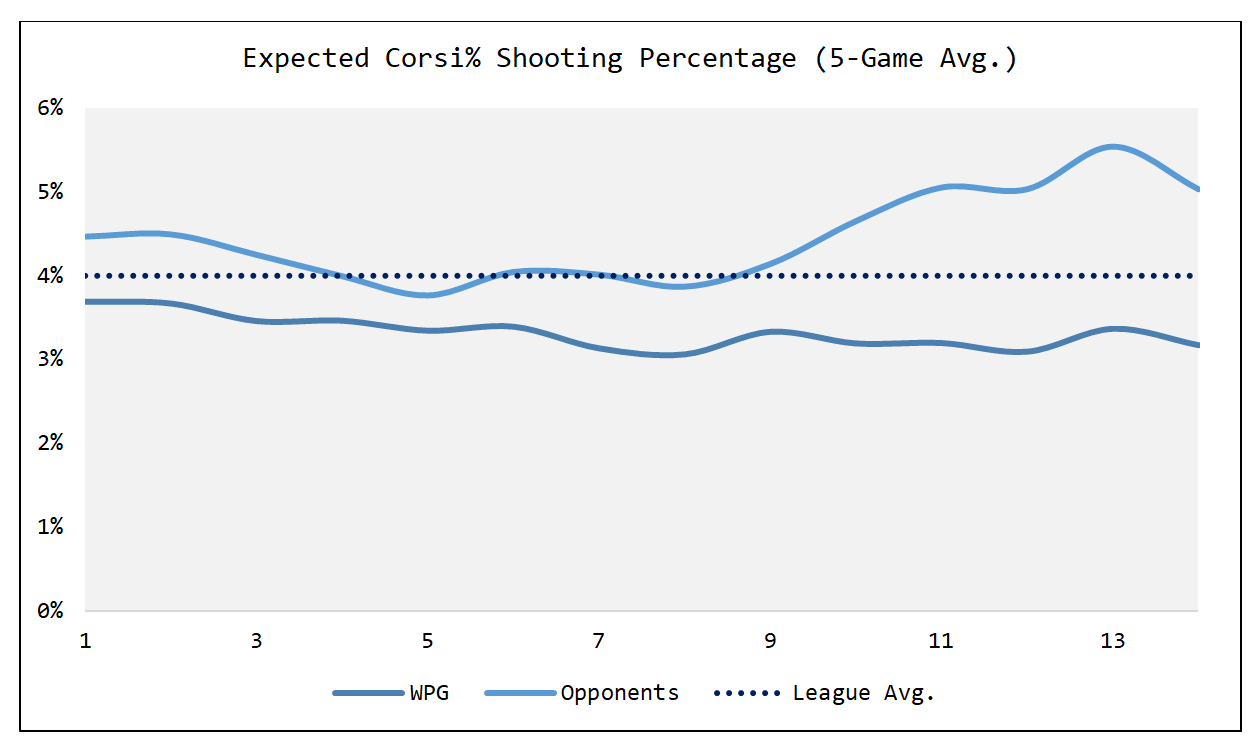 This is why the expected goal rates are so unfavourable, relative to the team’s shot differentials – opponents take shots from close and in tight, and Winnipeg does not. It means that the average opponent shot attempt at even strength has been about one per cent more likely to find the back of the net than a shot attempt by the Jets. That is sizable. 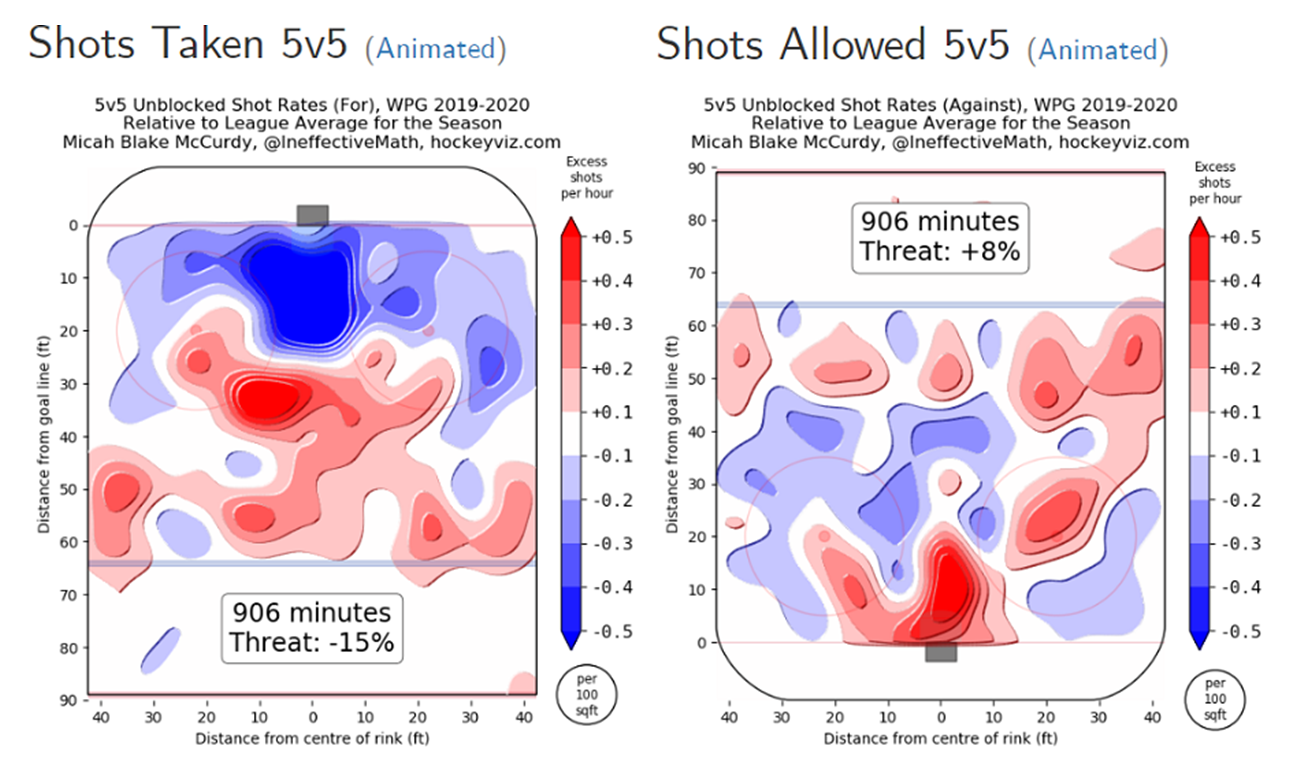 At the skater level on the defensive side, the problem isn’t unique to one line or a couple of pairings.

Absent Mason Appleton, Adam Lowry, Patrik Laine and Gabriel Bourque, every Jets skater is seeing higher-than-average quality shots against while on the ice. That group is headlined by five forwards – Nikolaj Ehlers (at 5.2 per cent), Mathieu Perreault, Kyle Connor, Jack Roslovic, and Andrew Copp. The concerning part there – same as it was last season – is that most of those guys are the players the Jets are expecting to drive the proverbial bus and win games.

In most cases, shot rates and expected goals tend to be quite similar to one another unless a team has truly mastered the art of counterattacking hockey. But Winnipeg is, again, an emphatic outlier on both ends of the ice so far this season. And although the goal differentials are hanging close to average right now, a huge piece of that has been their goaltender outplaying the opposing netminder most nights.

Goalie advantages are huge – the Jets lived the other side of the coin for years with Ondrej Pavelec and company out there. But eventually this dam will break. Either the defence will have to step up their structural interior play in the defensive zone, or the offence will have to start generating more dangerous scoring chances.

If neither happens the Jets remain a team at risk of slipping in the standings.