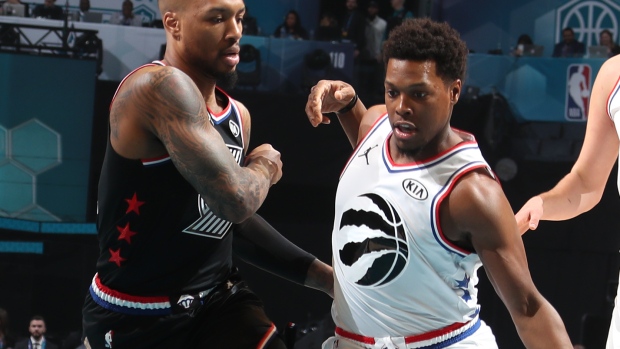 The Toronto Raptors will be represented at the NBA All-Star game by at least one player after Pascal Siakam was named a starter Thursday, but is there a case for a second Raptor to join him next month in Chicago?

Kyle Lowry is looking to make his sixth-consecutive All-Star game as a member of the Raptors and appears to have a strong statistical case for when the reserves are announced next week.

While Lowry missed 11 games due to a fractured thumb earlier in the season, his contributions are up this year for the defending champions, who currently sit third in the Eastern Conference with a 30-14 record. The 33-year-old is averaging 37.1 minutes per game – the second most in his career – and sits tied with Houston Rockets guard James Harden for most in the league.

Lowry’s offence is also up this season. He is averaging 20 points per game, third-highest mark in his career and most since the 2016-17 season; and 7.5 assists per game, down from last year’s 8.7 per game mark but still the second highest tally in his 14-year career.

Lowry is tied for seventh in scoring among Eastern Conference guards who have played 20 games or more this season, with two of the players ahead of him, the Atlanta Hawks’ Trae Young and Boston Celtics’ Kemba Walker, already named to the All-Star game as starters.

His 7.5 assists per game are fourth in the conference at his position, with Young one of the three players ahead of him.

On the defensive side of the ball, Lowry presents a decent case for All-Star inclusion as well. According to NBA.com, Lowry is fourth among Eastern Conference guards with a defensive win share of 0.148, behind only the Celtics’ Jayson Tatum and Khris Middleton and Eric Bledsoe of the Milwaukee Bucks.

Lowry’s numbers this year are on par with those of his previous five All-Star seasons, and come while he’s taking on an even bigger role for the Eastern Conference-contending Raptors.

In addition to Siakam’s nod, Kawhi Leonard was an All-Star starter for the Raps last season, making them the only team in the NBA since 2015 to have a starter in the All-Star game every year.