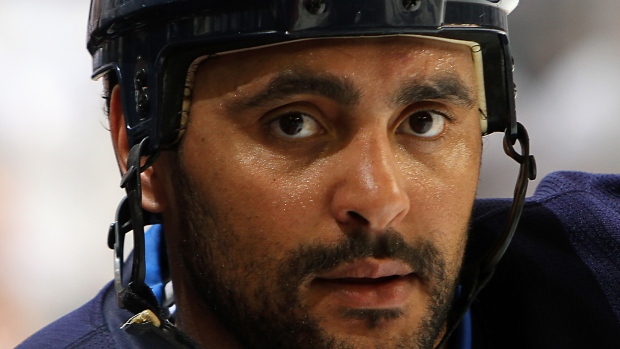 With the Winnipeg Jets down 3-0 in their series to the Anaheim Ducks, the all-star defenceman stuck to one talking point.

"As long as we stick together as a team we'll be all right," Byfuglien said as an answer to three straight questions.

Byfuglien didn't address having no points in the series or hitting Corey Perry from behind after the Ducks winger scored in Game 3. For just over 90 seconds his responses came back to the same theme.

Byfuglien isn't a fan of media interactions and made no secret of that with his comments the day after the Jets lost in overtime to the Ducks. It was reminiscent of Lynch, the Seattle Seahawks running back who at Super Bowl media day kept repeating the line, "I'm just here so I don't get fined."

The Jets won't get fined because Byfuglien fulfilled his media obligation. As for what he said or didn't say, coach Paul Maurice had no problem with Byfuglien taking his stance.

"As a competitive man he has the right to come out here and say that," Maurice said. "I want you to fully appreciate the number of F-bombs that he dropped on you in the back of his brain that didn't come out, out of the sense of the civility that he (has). He's a kind and civil and giving man, so the fact that he didn't tell you how he really felt, I think, is mature."

Maurice didn't open up about Byfuglien's demeanour behind closed doors or how he responded to a four-game suspension late in the season and then the penalty for decking Perry. The coach preferred to keep his conversations private.

"I absolutely love the guy," Maurice said. "I've moved him up front, back, he scored an overtime winner against Minnesota, he keeps that room light and he's not perfect."

In the media spotlight, Maurice conceded some jealousy of Byfuglien for how he handled himself Tuesday.

"There's been lots of days that I've come out and wanted to tell you what I'd like to invite all of you to do," Maurice said, noting it wasn't personal. "I get about five answers in my head to every question that's asked and they just pop up. One of them is so profane and inappropriate, like my parents would disown me even at my age. My dad maybe not so much. I learned most of it from him."

There was no profanity in Byfuglien's brief media session but also no analysis of his game. He was on the ice for three goals against Monday night, but Maurice said Byfuglien's minus-3 rating doesn't tell the whole story.

"The penalty (for hitting Perry), he can't take," Maurice said. "He's been like the rest of us, there's been good parts to his game and parts he needs to be better at."

Asked about taking personal responsibility for the Jets being behind three games to none, Byfuglien said only, "As long as we're a team, we're together."

Maurice is OK with all of that.

"I'm glad he came out and did what he did," he said. "It's not perfect and sometimes things aren't right. But that's Dustin, and we love him."