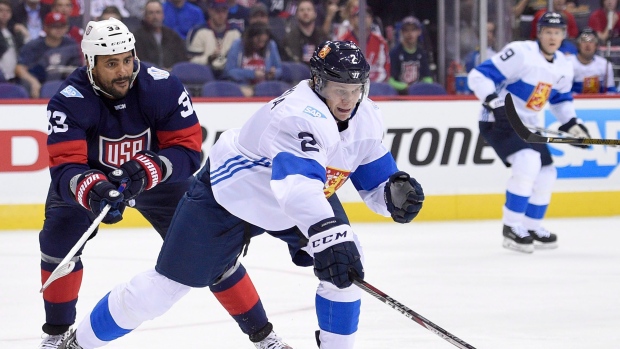 TORONTO — The months-long second guessing of Team USA’s lineup boiled to the surface again on Saturday, hours before the Americans even took the ice for their first World Cup of Hockey contest.

John Tortorella announced Dustin Byfuglien and Kyle Palmieri as the team’s healthy scratches prior to their matchup with Team Europe.

Byfuglien, a Roseau, Minn. native, will have to wait to appear in an international tournament game for Team USA for the first time in his career. Tortorella instead chose his own Columbus Blue Jackets player Jack Johnson, among others, over one of the NHL’s most rugged and dynamic blueliners.

Byfuglien led all American-born defencemen in scoring in the NHL last season in both goals (19) and points (53). Without him, Team USA’s opening lineup will feature only two of the Top 10 scoring American defenceman from last season: John Carlson is the other and Shayne Gostisbehere plays for Team North America.

“It’s just the way it worked out,” Tortorella explained. “Through the games, through the minutes that the guys played, we felt to start the tournament this would be our lineup. Certainly (not) ‘Buff’ and Kyle didn’t do the things we were looking for them to do, but as we went through our lineup and the situations that we may get involved with: power play, penalty killing and all that, we felt this was our lineup to start the tournament. (It) could change as we go through.”

Team USA was built to be one of the toughest teams to play against, with grit and tenacity circling throughout their lineup. It’s hard to figure how missing Byfuglien, a 6-foot-5, 260 lb behemoth will help in that regard.

But the writing appeared to be on the wall for Byfuglien, who spent time at forward for a stretch in Team USA training camp, a position he has not played since before Paul Maurice took over as Winnipeg Jets head coach in 2013.

Byfuglien played just 10:32 in Team USA’s final exhibition game on Tuesday night, the least ice time of any player on the team. He saw only three shifts in the third period of that game against Team Finland.

“Some guys early on, I looked and said, 'They're just not ready to give here,’” Tortorella said Friday. “I won't give away names, but I was really worried about a couple of guys, and then they came right to the forefront. They're going to be in the lineup. Some other guys have played themselves out of it. Nothing is fair with five days of practice in determining a lineup, but that's the world that we live in this tournament, and that's the way we've gone about it.”