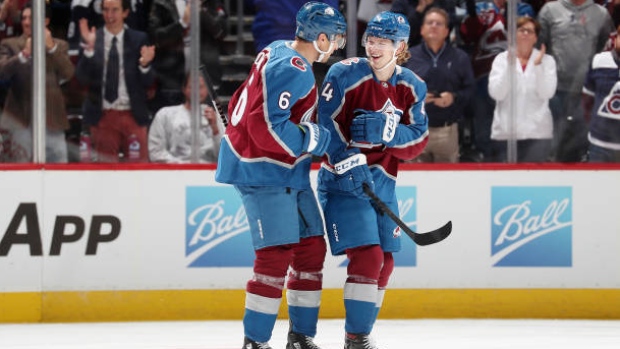 DENVER (AP) — Bowen Byram scored his first NHL goal and added an assist to lead the short-handed Colorado Avalanche to a 4-2 victory over the Chicago Blackhawks in the season opener for both teams Wednesday night.

Nazem Kadri and Gabriel Landeskog each had a goal and an assist for Colorado, which played without star center Nathan MacKinnon and head coach Jared Bednar. Both are in the COVID-19 protocol and away from the team.

Kuemper, acquired from Arizona in the offseason, wasn’t tested early, but made two big saves on Kirby Dach in the second period. Dach had a breakaway at 12:02, but Kuemper closed the pads on his shot. Minutes later, he had another wide-open chance from the left circle that Kuemper stopped.

Soon after, Byram fed Kadri for a goal and a 4-1 lead.

Colorado got a measure of revenge on Chicago goaltender Marc-Andre Fleury, who helped Vegas beat the Avalanche in the second round of the 2020-21 playoffs. Fleury faced a barrage of shots early when Colorado had 17 of the first 19 shots on goal.

Johnson, who made the team on a professional tryout contract, opened the scoring at 4:26 of the first period. Landeskog’s deflection 1:22 later made it 2-0, and Byram scored at 9:34 to put the Avalanche ahead by three.

The Blackhawks got on the board late in the first period when forward Dominik Kubalik scored on the power play at 16:47, cutting Colorado’s lead to 3-1.

Connor Murphy scored an unassisted goal at 15:13 of the third period. Chicago went on the power play at 16:26 and pulled Fleury for a 6-on-4 advantage, but couldn’t score.

The Avalanche are hopeful MacKinnon and Bednar can return for Saturday night’s game. Both are asymptomatic and could “test out,” according to general manager Joe Sakic.

NOTES: Forward Jayson Megna was recalled from the AHL to fill MacKinnon’s spot. He centered the fourth line. ... Chicago C Jonathan Toews played his first game since before the pandemic. He opted out of last season after being diagnosed with of chronic immune response syndrome. ... Colorado is 17-6-3 in home openers since moving to Denver in 1995.

Blackhawks: At the New Jersey Devils on Friday night.