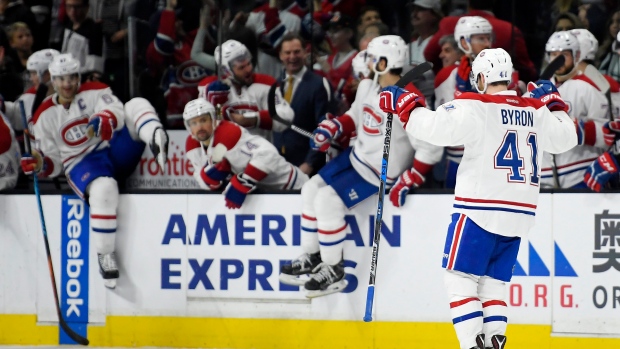 LOS ANGELES — After struggling for offence throughout their road trip, the Montreal Canadiens finally found a whole bunch of goals at Staples Center.

So did the Los Angeles Kings, which left goalie Carey Price both frustrated and grateful after a high-volume victory.

Max Pacioretty had two goals and an assist, and Paul Byron scored the clinching goal in the fourth round of a 5-4 shootout victory over Los Angeles on Sunday.

Alexander Radulov and Andrew Shaw also scored for the Atlantic Division-leading Canadiens, who earned just their second victory in seven road games. Montreal had only one win in its previous 11 games in California before scoring three times in the four-round shootout.

Before all that, an unusual afternoon home game for the Kings led to a rare goal bonanza: The teams' combined eight regulation goals — including six in a crazy second period — were the most scored in a game featuring either club in the past month.

Montreal finally found its scoring touch on the fourth stop of its five-game road trip after managing just five combined goals in the first three games, including losses at Anaheim and San Jose. After Shaw's goal early in the third period forced extra time, Radulov put an offensive flourish on the shootout with an exceptional backhand goal moments before Byron's winner.

"When the whole team is playing hard and we get it going, it's hard to play against us," Radulov said. "It's always nice to score, but it's huge for us to get going and get our confidence back."

Pacioretty had a chance to end the shootout in the third round, but Budaj stopped him. Byron then ended it after Tanner Pearson missed for the Kings.

Jeff Carter and Drew Doughty had a goal and an assist apiece for the Kings, who lost for only the second time in eight games. Peter Budaj stopped 26 shots, but the Kings have given up 11 goals in three games during their worst defensive stretch since the opening days of the season.

"We pride ourselves on a hard-checking game, good defensively," Doughty said. "We try, at the most, (to) give up two goals a game, and that's why we lost. We gave up four. It wasn't the offence that was the problem. They did a good job today."

Carter and Shore connected 2:14 apart to start the second. After Pacioretty evened it on a power play for his first multi-goal game of the season, Doughty scored his fourth goal with a slap shot on a power play.

Radulov evened it again on the power play, but Lewis put the Kings ahead with a slick move on a rare breakaway. Lewis has just four goals all season, including the late go-ahead goal in the Kings' win over Arizona on Thursday.

Shaw evened it with his sixth goal early in the third, giving him a point in all three California games.

"They are a real high-octane team," Los Angeles coach Darryl Sutter said. "They haven't done it lately, but it was something we addressed the other day. They scored the first goal, and we still found a way to get back and get a point."

NOTES: Before the game, Los Angeles activated C Andy Andreoff from injured reserve and assigned veteran F Teddy Purcell to its AHL affiliate in Ontario. Purcell has only two assists in 12 games in his return season with the Kings. ... The Canadiens beat the Kings 4-1 in Montreal on Nov. 10. ... Kings captain Anze Kopitar had three assists, giving him five in the past two games after a slow offensive start to the season.