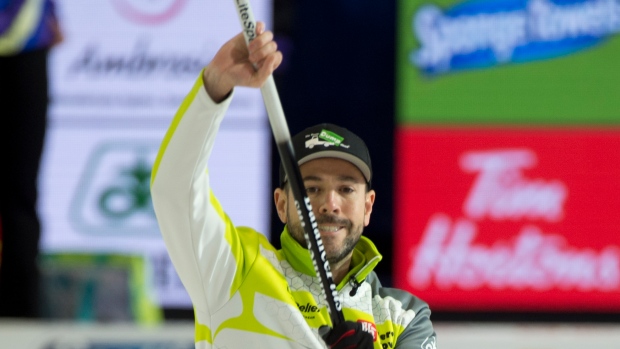 The stay in the curling bubble starting next month in Calgary could be brief for some athletes and a very long one for others.

"We're going to pack for two months," said Toronto-based skip John Epping. "The longer we're in there, the better. That means we're winning and doing well."

The Feb. 20-28 Scotties Tournament of Hearts will kick things off at the Markin MacPhail Centre.

If members of the Brier-winning team also plan to play mixed doubles and both Slams, it could mean staying put in the bubble until early May.

"I think it's just going to take a lot of planning from everybody," said Nolan Thiessen, Curling Canada's director of broadcast, marketing, innovation and event presentation.

"The earlier the better in terms of knowing what events they plan on playing in and what events they're going to be in there for, and really set up a plan for it because it's not the usual."

The Scotties winners will be making travel plans ahead of the March 20-28 women's world championship at Schaffhausen, Switzerland.

The Brier champions, meanwhile, will have home-ice advantage for the men's worlds a few weeks later. Mixed doubles is slotted in between, but curlers may still be able to leave the bubble depending on their schedule plans.

However, travel restrictions, quarantine rules and limited practice options may impact those decisions.

"You'd obviously have to re-do the protocols and everything (upon return)," Thiessen said. "But there is sufficient time for them to do that if they wanted to do that."

Given that the Canada Olympic Park venue has only four sheets, the mixed doubles may be stretched to a seven- or eight-day competition. It will likely start around March 19.

Curling Canada is planning to have players' lounges and a dedicated workout area on site. But normal off-draw routines for curlers -- like taking in a movie or getting together with friends and family -- obviously won't be possible.

Several provinces and territories still have traditional playdowns on the calendar this month despite the challenges due to the pandemic. Other associations have invited last season's champions to represent them once again.

The Scotties and the Brier have used 16-team fields over the last few years but Thiessen said there's room for flexibility this time around.

"There's a lot of options," he said from Calgary. "There's 16, and if we ended up having associations that didn't want to come, we could go lower. We've got a lot of different draw options ready. I think the regular timeframe and the number of draws will be very similar."

Thiessen added that the fields are expected to be finalized around Feb. 1 and details on wild-card entries could be released in a couple weeks.

The Friday night play-in games that normally determine wild-card entries have been scrapped for this year. Several teams could make the case they deserve the spots.

Team Kevin Koe, for example, was the Canada entry at last season's Brier and didn't play in the Alberta playdowns. Ranked sixth in the country, Canada's representatives at the 2018 Winter Games would strengthen any field.

Other top-10 teams could also make a case, including those skipped by No. 5 Mike McEwen (2020 Team Wild Card), No. 9 Glenn Howard (lost Brier play-in game) and No. 2 Tracy Fleury (lost Scotties play-in game).

"Of course we want to have as many good teams there as possible," Thiessen said. "How we get there, we're just waiting to see because there's a few different options out there.

"Everybody has got to be a little bit flexible this year because it's not normal."

There will be added pressure at the world championships. The top six finishers at the men's and women's playdowns will secure berths for their respective countries at the 2022 Beijing Games.

"It's a pretty big thing for us to ensure that we have a strong rep and you get a strong rep from having a strong competition," Thiessen said. "So we're going to try to see what we can do to make sure that the competition is as strong as possible."