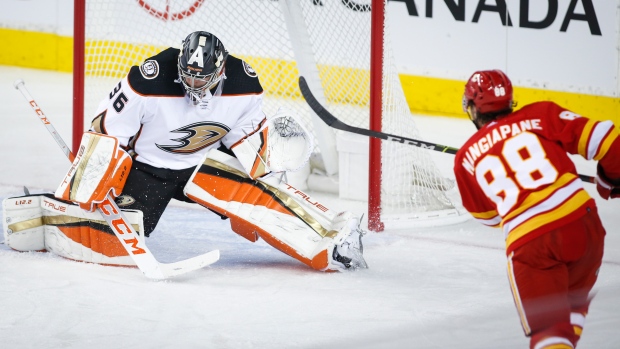 Calgary Flames winger Johnny Gaudreau is calling on his team to have more of a net-front presence after managing just four goals on 90 shots through their first two games this season.

The Flames registered 43 shots on goal in Monday's 3-2 overtime loss to the Anaheim Ducks. That came two nights after posting 47 shots in a 5-2 loss to the Edmonton Oilers in their season opener on Saturday.

"We have 40 shots in both games, but we've got to get someone in front of the net," Gaudreau said. "We've got to take the goalie's eyes away and find a way to score some greasy goals."

The Flames outshot the Ducks 43-27 on Monday, though the Ducks managed three shots to the Flames' one in overtime, with Jamie Drysdale providing the overtime winner with just over 90 seconds left in the frame.

Blake Coleman opened the scoring against the Ducks, beating John Gibson on a breakaway in his Flames debut.

"It's obviously a good start," Coleman said post-game. "I was excited. I had my daughter in the stands. That's kind of where my head went, honestly. She doesn't come to all the games. She's kind of been my good-luck charm. It's a fun thing we have. But from the hockey side of it it's another game, another goal that you're just trying to help your team win.

"I would've liked to bury another couple chances tonight, but we just couldn't get them to fall."

Coleman, who joined Calgary on a six-year, $29.4 million contract as a free agent in July, missed the Flames opener while serving the final game of a preseason suspension for boarding.

The Flames will look for their first win of the season on Thursday against the Detroit Red Wings.