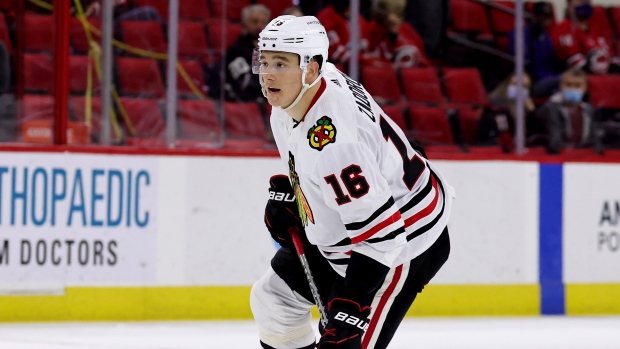 The Calgary Flames inked a pair of defencemen on Friday with new deals for Nikita Zadorov and Juuso Valimaki.

Zadorov agreed to a one-year, $3.75 million contract, while Valimaki re-upped for two years and $3.1 million.

The #Flames have signed @zadorov61 to a one-year deal: https://t.co/aTUIwdp1kI pic.twitter.com/g6zYUMeNdA

A restricted free agent, Zadorov, 26, was acquired by the Flames from the Chicago Blackhawks last month for a third-round selection in the 2022 NHL Entry Draft.

He appeared in 55 games for Chicago last season, scoring a goal and adding seven assists over 19:12 of ice time a night.

A native of Moscow, Zadorov heads into his ninth NHL season.

Originally taken with the 16th overall pick of the 2013 draft out of the Ontario Hockey League's London Knights, Zadorov is a veteran of 411 career games with the Buffalo Sabres, Colorado Avalanche and Blackhawks.

Internationally, he's represented Russia on a number of occasions, including this past spring's IIHF World Hockey Championships.

A busy day for the Calgary Flames, as young blueliner Juuso Valimaki has re-signed for 2 years @ $1.55 million/season

Valimaki, 22, was also the 16th overall selection in his draft year of 2017. Last season was his second in the NHL.

A native of Nokia, Finland, Valimaki appeared in 49 games for the Flames, scoring two goals and adding nine assists over 15:26 of ice time a night.

Valimaki appeared at the IIHF World Junior Hockey Championships for the Finns in 2017 and 2018, serving as captain in the latter year in Buffalo.