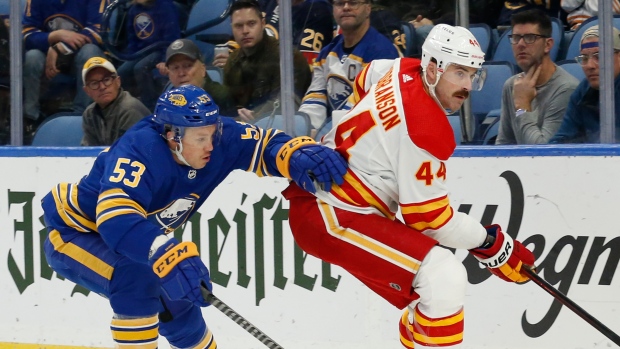 Erik Gudbranson has been around the block during his decade in the National Hockey League.

Following a stellar junior hockey career with the Kingston Frontenacs, the defenceman was drafted third overall by the Florida Panthers in 2011 and dealt to the Vancouver Canucks four years later. The Canucks then traded him to Pittsburgh in 2019, starting a stretch where he changed teams almost as often as he scored goals.

This off-season, Gudbranson signed a one-year deal in Calgary – the seventh stop on his NHL tour, and fifth in the past three seasons.

Despite having played nearly 600 games, that grind, and pressure has, at times, affected him.

“In a few places it’s gone well for me and a few places it hasn’t,” Gudbranson said. “Where it hasn’t, it was very, very difficult mentally. We do carry a spotlight on us and in some of the markets that I’ve played in, you walk into a restaurant, and you feel like people are breathing down your neck. They know the pass you made last night that didn’t work well for you. Those things became heavy on me big time…I have no shame in talking to my teammates about it. It’s definitely true that you deal with that pressure.”

Gudbranson has settled in nicely on the Flames’ third pairing this season alongside Nikita Zadorov. For the past few weeks, he’s been doing so with some added facial hair.

During November, Gudbranson and fellow Flames Mikael Backlund, and Milan Lucic are growing moustaches as part of Movember, a charitable effort promoting men's health and wellness.

“It’s a fun thing to do for a good cause,” Backlund said, noting how his stache had evolved since his junior days with the Kelowna Rockets nearly 15 years ago.

“It’s a fun journey to see how it grows every year, a little thicker and darker,” he said.

Movember promotes regular checkups for men to screen for prostate and testicular cancer, as well as the mental health challenges that men face. According to the Toronto-based Centre for Addiction and Mental Health, over 75 per cent of suicides in Canada involve men, and men have higher rates of addiction than women.

“In the NHL, unfortunately we lost a couple of players that were dealing with mental health issues, so I think that made it even bigger,” Backlund said. “Over my years in the league, the awareness of mental health has definitely grown. It’s important we’re all doing well and mentally doing well and can live a good life.”

Lucic has been open about his own mental health and how he considered retiring from the sport a couple of years ago. He has also talked publicly about his father’s death by suicide. Lucic, who celebrated his 1,000th game in the league last season, has noticed that hockey players are far more open about such topics now than when he played his first game back in 2007.

“I feel like before, you were always told to shut your mouth and hold your feelings inside,” Lucic said. “Now, just having those conversations and talking about it helps people overcome whatever they are going through. A lot of people are going through things that you might not know. They show they’re okay, but they’re not okay. So, it’s just good to have those conversations and raise awareness.”

For the past few weeks, Gudbranson, Backlund, and Lucic have all worn their moustaches proudly – even if their significant others bristle at the sight.

“She doesn’t really, really like it,” Lucic laughed. “But her dad was a fireman for 30 years and he always rocked the moustache, so she’s used to that.”

In the Backlund household, November 30 – the day the Movember stache is shaved – is a sacred holiday.

“She has a birthday in November, so that helps a bit,” Backlund said. “It’s not just the darkest month of the year, it’s Movember…she’s not a big fan.”

All, however, for a worthwhile cause.

“This is the month we do it for men, but it’s for everyone at the end of the day, and I’ve dealt with my fair share of stuff,” Gudbranson said. “Guys like to be tough guys, but the truth is people need you to stick around and you need to be healthy to do that. If something’s worrying you, the tough choice is to go get it checked out and there’s no shame in that whatsoever. So, this is a great month to talk about it.”