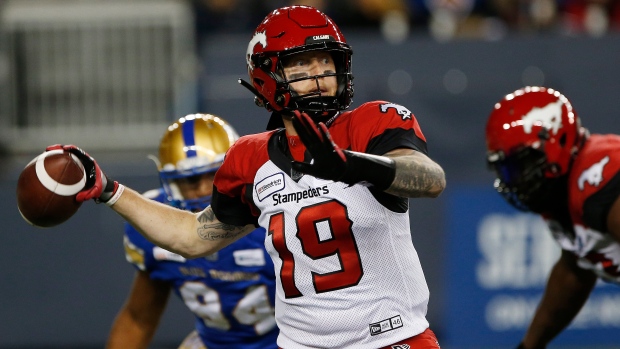 Mitchell’s recovery timeline brought into question whether he’d be ready for the start of Stampeders training camp. But with the possibility training camps are delayed as part of the ongoing COVID-19 pandemic, Mitchell could have more time get healthy.

"It almost seems like a little bit of a blessing in disguise if something might get pushed back season-wise," Mitchell told TSN’s Farhan Lalji. "Guys that did get off-season surgeries or are rehabbing, they’re trying to fight to get back to that Week 1. So right now I’m just trying to go as hard as I can in rehab."

Rehab has been a challenge however, Mitchell said. While a potential delay of the season gives him more time to work on his shoulder, the conditions to do have been affected by the pandemic as well.

"Even that (rehab) is affected by COVID-19. Right now we’re only allowed to be at the facility for an hour a day, three times a week. There can only be one person in there at a time with the trainer or working out. It’s very limited, you have to get there, get your work in as much as you can. A lot of us have now borrowed equipment from the Stamps so we can do our workouts at home too."

While the league has so far postponed the Combine and Global Draft, training camp is still slated to open May 17 for the time being. Mitchell said he was confident he’d be ready to go by then.

"I was confident of being back and being throwing. I didn’t know if I’d be ready to throw the ball 50 times a day, twice a day during training camp, but I knew I was going to be there for training camp and be ready to go and hopefully be full go, ready to be tackled, landing on my shoulder and everything by Week 1."

Mitchell said this is the first time in his football career he’s ran into any real injury problems, and said he’s eager to prove next season this spell is just an outlier.

"Injuries always affect the way people think about you no matter what age you are. But I turned 30 this year. You get injured then you turn 30, people start saying, ‘maybe that hill’s coming.’ I’ve definitely got a chip on my shoulder to come back and show the CFL what I have for my entire career."