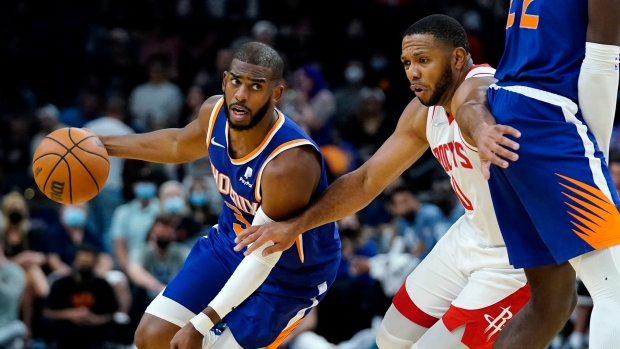 In fantasy sports, particularly in basketball, it’s important to know what the average drafted player produces on a nightly basis. In standard 12-team, 13-roster spot formats, 156 players are taken at any given time. Knowing how your players measure up is fundamental for team building purposes.

Below, I’ve spotlighted the averages for all nine categories this season and compare it to 2020-21.

The sample size is small, we’re roughly 10 per cent into the year, but let me go through the key findings to help you manage your team.

The most noticeable difference in fantasy right now versus 2020-21 is the collective decrease in scoring volume. The drop-off starts all the way from the top. Last season, Stephen Curry’s 32.0 points per game was 2.46 standard deviations away from the average player. This year, Paul George’s 29.1 points per game gives him a 2.24 z-score.

You might compare your player’s scoring output to last season, see the dip and assume he’s regressing, but as long as it maintains relative to the league-wide trend, don’t devalue your guy just yet. If you roster players like Michael Porter Jr. or Damian Lillard, that’s legitimate cause for concern.

From a betting perspective, it’s worth noting that players who qualify as PF or C have seen less of a scoring dip than the guards. From the top centre to the 25th or 50th on the list, scoring is either flat or actually slightly up versus 2020-21. If you go through the same exercise with perimeter players, every player this season is comparably scoring less than their ranked counterparts from last season. The league-wide scoring problems are more weighted to the guards.

Assists are also down, steals are up

Regarding assists, Chris Paul is so far ahead of the field that he deserves to be classified in a tier of his own. Regression is naturally expected but considering the fact he’s taking 25 per cent fewer shots than last season, this could be a trend. Assists are naturally correlated with scoring – you don’t get credit for making the pass for a bricked three-pointer. As with points, don’t sweat a player if you expected more passing from them, everyone should collectively rise back up. If assist volume starts to creep back up league-wide and your player remains flat, that’s when you should begin re-assessing their value.

Steals are surprisingly up and it’s not all just Toronto Raptors guard Gary Trent Jr. Turnovers have remained unchanged year-over-year so I’m not sure if this is an anomaly or has something changed with how scorers are accounting for steals versus bad passes, etc.

Blocks remain most top-heavy categories of 2021-22

The trend remains the same as years past, blocks are mostly accumulated by a handful of rim protectors across the NBA. Al Horford currently ranks third but that feels a bit unsustainable. Matisse Thybulle, Tyrese Haliburton and Derrick Jones Jr. are the only guards that crack the top-25 list.

Blocks continue to be the most polarizing category in fantasy basketball – you either punt it completely or dedicate a few roster spots with players overweight on rejections. There are several players outside the top-100 that you can stream each week to close the gap on this category. Jones Jr., Hassan Whiteside and LaMarcus Aldridge are all rostered in less than 50 per cent of leagues.

Give up on threes if you have the old-school players

Of all the counting stats, three-pointers are the most democratic. More than half of the players in standard leagues shoot above the league-average of 1.72 threes a game. For every other category, it’s the top players pulling up the league average.

In today’s NBA, traditional bigs like Richaun Holmes and Montrezl Harrell are registering the odd three-pointer. With analytics influencing offensive shot selection, it’s no wonder everyone is out there chucking.

For fantasy purposes, how do we take advantage of this info? If you roster any players like Jimmy Butler, Scottie Barnes, DeMar DeRozan, or Rudy Gobert, design your team to punt three-pointers. These players are such a drag on your three-point production that even rostering just two or three of them puts you at an extreme disadvantage. The rest of your team would have to do so much heavy lifting to stay competitive.

Many centres have evolved into three-point friendly players (think Jonas Valanciunas) but if you have any of the old-school non-shooting bigs or guards, consider trading players on your roster whose value is tied to three-point production. Get your eggs in one basket, bulk up in the other five counting categories.