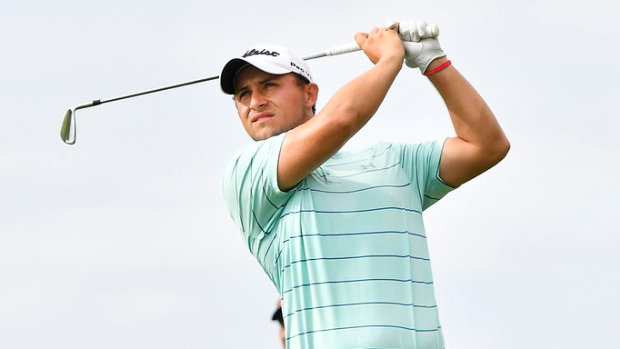 WESTON, Florida—By winning the Mackenzie Tour – PGA TOUR Canada Qualifying Tournament at The Club at Weston Hills, it became a week of firsts for Colombia’s Camilo Aguado. As he smiled following his three-shot win over a Jeremy Gandon, Jason Thresher and Gavin Hall, he was more than happy to detail each one.

Most importantly, Aguado is exempt into every 2021 Mackenzie Tour tournament, adding that Tour’s membership to his resume. After opening with a 10-under 62 in the opening round, Aguado never looked back, winning wire to wire—something he’s also never done. Finally, he secured a title in the U.S., something he has wanted to do ever since his amateur days playing collegiately for Jacksonville State in Alabama.

Although his margin was three strokes, it came with a little angst. Aguado admitted he didn’t have his best stuff Friday, but after finishing his third round in the morning—playing 22 holes for the day—he held a six-shot lead when he teed off just after noon at the Players Course. Even with the commanding advantage that never dropped below three strokes, he did concede it took him a long time to finally feel comfortable.

“To be fair, not until the last hole,” he said with a laugh. “I didn’t feel very comfortable with my swing today. I was a little bit out of synch. My swing didn’t feel good at all, starting at 14. I was just trying to put the ball in play.”

Playing with Gandon and the lefthander Hall for the final 36 holes, Aguado watched Gandon birdie Nos. 7, 9 and 10 to draw within three. “I definitely saw that [Gandon] was playing really good. He was playing fast, I think, aiming and shooting,” Aguado added. “I kept seeing him putting it inside six feet. At some point, I just knew I had to make some birdies.”

After making birdies at Nos. 7 and 8, Aguado bogeyed the ninth. Gandon drew closer by tapping in for birdie after just missing holing out for eagle a second time there this week. Gandon added a birdie at 10 to move to within three. Both players parred the 11th hole, while Hall, the third member of the group, made birdie. Hall followed that with another birdie at 12, looking to make some noise. But Aguado put a birdie on the board at the same hole—with Hall only able to make pars the rest of the way. Thresher playing a group ahead was 2-under when he made the turn and looked like he might put pressure on, especially when he added a birdie at 11. But an up-and-down finish doomed his chances, with two birdies, two bogeys and two pars coming in.

Aguado had a bit of an adventure at the end, making saving pars at Nos. 15 and 16 then three-putting the 17th from 25 feet for bogey. Once his tee shot on 18 was on dry land, though, he could exhale.

“It’s going to be fun to see what’s going on in Canada and then with [PGA TOUR Latinoamérica],” Aguado explained. “Let’s see. I hope we can play also and have both Tours. It’s going to be cool.”