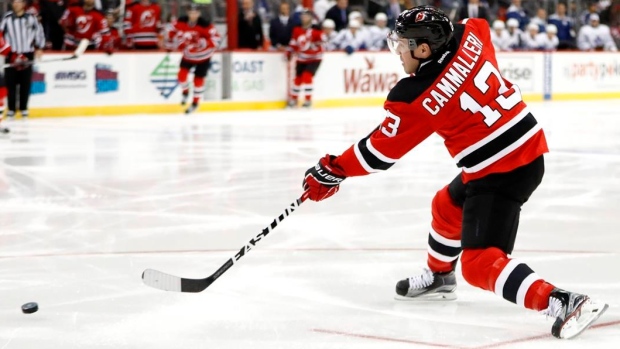 Veteran forward Michael Cammalleri was a healthy scratch on Saturday for the New Jersey Devils against the New York Islanders.

Cammalleri, who is in the midst of an 18-game goal drought, was not happy with the decision by head coach John Hynes.

"You want to be a part of it," Cammalleri told NJ.com prior to the Devils' 3-2 win. "I'm displeased to not be in the lineup, certainly."

The 34-year-old started the season with nine goals in 18 games but owns just one goal in his past 33 games.

"That's one part of it," Hynes said of Cammalleri's goal drought leading to his scratch. "Michael's a goal scorer at this level. He's proven that. He's obviously struggled to be able to do that, but it's not always just on goal scoring. Some things that can possibly lead up to that.

"Those are the things we'll talk about personally with the player, but it's all in a situation where we need to try to help him get back to being a very productive player for us."

Cammalleri, who has nine assists in his past 18 games without a goal, said he remains fully committed to the Devils.

"I've been, in my opinion, committed to everything we're trying to do all over the ice," Cammalleri said. "The puck just hasn't gone in, and I'll try to continue to search for solutions. It's something I'm confident changes."

On the season, Cammalleri owns 10 goals and 20 assists in 51 games. His 8.8 per cent shooting percentage is the lowest mark he's posted since the 2010-11 season, when he was with the Montreal Canadiens.

Cammalleri was scratched again Sunday as the Devils fell to the Islanders, 6-4.