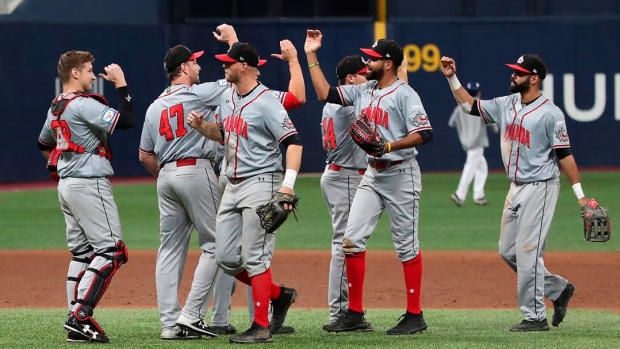 SEOUL, Korea, Republic Of — Veteran Michael Saunders was confident that Canada had the potential to pull off an upset or two at the Premier 12 Olympic qualifier.

And that's exactly how the Canadians opened their tournament.

No. 10 Canada followed through in their first game on Wednesday with a 3-0 victory over No. 5 Cuba.

Saunders, who'll turn 33 this month, cashed in the game's first run with a single in the top of the fourth inning, which was all Canada needed after a strong outing from starter Phillippe Aumont.

Aumont went eight innings, allowing just two hits and one walk while striking out nine to record the victory. Scott Mathieson came in for the ninth and struck out the side.

Carlos Viera pitched 5 1/3 innings for Cuba (0-1). He gave up three hits and one earned run alongside four walks and seven strikeouts.

The Cuban pitching staff limited Canada to just six hits, but gave up nine walks. Three of them came in the top of the eighth inning from reliever Livan Moinelo and led to two insurance runs and 3-0 lead for the Canadians.

The Premier 12 in South Korea is a qualifier for the 2020 Tokyo Olympics and features the top 12-ranked baseball nations in the world.

Canada plays South Korea and Australia in round-robin action Thursday and Friday, respectively. The top two teams from the group advance to the tournament's Super Round in Japan.