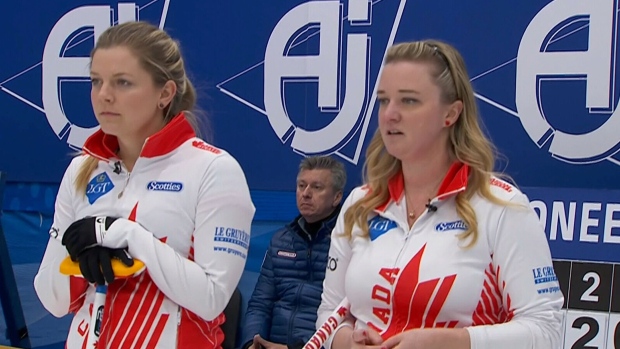 SILKEBORG, Denmark — Canada's Chelsea Carey has some work to do to make the playoffs at the world women's curling championship after dropping both of her games on Tuesday.

Scotland's Sophie Jackson scored one point in an extra end for a 6-5 win over Canada and American Jamie Sinclair followed with a 13-6 victory over the Calgary-based rink.

Carey, who fell to 3-4, was tied for ninth place after 11 draws. The top six rinks in the 13-team field will make the playoffs.

Carey appeared to be in control against Scotland until Jackson tied the game with a deuce in the eighth end and took a 5-4 lead with a steal of one in the ninth. Canada forced the extra end with one in the 10th, but missed a chance to win when Carey's last shot was heavy.

With the last shot in the 11th, Jackson cleared a Canadian stone off the four-foot ring to score the winning point.

"We're just not getting rocks where we need them, when we need them," said team coach Dan Carey. "I'm not sure what happened. We just didn't make as many shots in the last half of the game as we needed to. Really it came down to that short run that we missed, and we seemed to struggle from there on."

That "short run" was a shot the Canadian skip attempted in the seventh end. The runback takeout would have scored four for the Canadians and given them a 7-2 lead but it didn't curl enough and Carey settled for a single and a 4-2 lead.

Jackson tied the game with an eighth-end deuce and stole one in the ninth to take her first lead. In the 11th end, Jackson — who'd missed three straight games with a back injury — settled her nerves to make the shot for the win.

In the U.S. game, Carey started strong by scoring three points in the first end. But Sinclair scored five in the sixth end and tacked on four more points in the eighth when Carey missed a long angle-raise tap.

"It wasn't a five ever," Carey said of the sixth-end turning point. "The end was going fine, we were in pretty good shape for most of it. Maybe it was a two for them. But we just can't buy a break right now. We're not playing that bad right now, but we just can't get anything going our way and it's frustrating."

The teams shook hands after eight ends as the Americans improved to 3-4.

"It's pretty frustrating to end up with a scoreboard like that when the game was really so much closer," said Canadian women's team coach Elaine Dagg-Jackson. "It's the best start they've had and that sixth end just snuck up on them in one shot. And it was tough to get out of it.

"That team you saw win the Scotties three weeks ago — this is the same team, and they can do the same things. It's just that at the moment, it's not all coming together for them at the same time."

In other late results, Russia needed an extra end to get by Finland 9-8, Switzerland topped Latvia 8-5 and China beat Germany 8-6.

China and Russia were in first place at 6-1, followed by South Korea and Sweden at 5-1. Scotland was alone in fifth place at 4-2 and Germany, Japan and Switzerland were 3-3.

Canada has several tough opponents ahead over the final three days of competition, including games against both first-place teams and second-place Sweden.

Carey settled for a fourth-place showing in her debut appearance at the world women's championship in 2016 with a different team.

It has been 20 years since Canada missed the playoffs at this competition.

Colleen Jones finished in a tie for fifth place with a 4-5 mark at the 1999 playdowns in Saint John. That event had a 10-team field with the top four teams advancing to the playoffs.