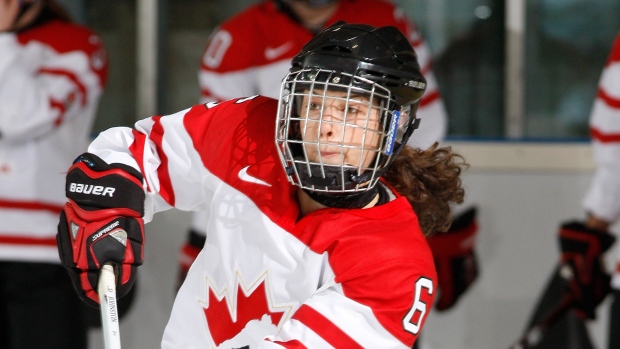 VIERUMAKI, Finland — Canadian goaltender Emerance Maschmeyer's starts in international women's hockey are few and far between, so she wants to make the most of them.

The 22-year-old from Bruderheim, Alta., turned away all 18 shots she faced in Canada's 3-0 win over host Finland to kick off the Four Nations Cup on Tuesday.

It was Maschmeyer's fourth career shutout in 10 starts (6-4) with the national team.

"The shutout feels great. It always does," she told The Canadian Press from Vierumaki.

"There's two tournaments a year and that's the only opportunity to show our play at the international level, so any chance I have to start, it's a huge opportunity and I take it very seriously.

"It's very special every single time I put on that jersey and I'm starting in goal."

Rebecca Johnston of Sudbury, Ont., scored a goal and an assist to pace Canada's offence in the tournament-opener.

Veteran goaltender Noora Raty turned away 32 of 35 shots for the Finns, whom Canada had beaten 4-1 in a pre-tournament game Sunday.

Canada dominated puck possession for two periods before Finland pushed back in the third.

"They always clog up the middle of the ice," Canadian coach Laura Schuler said. "They really are very structured in their trap.

"One of our focuses today was to play with more poise and patience and try to work the puck and get it in behind them. I think we did a much better job of that today. Noora Raty played exceptional for them."

Canada was held scoreless on five power-play chances, including a two-man advantage in the third period. Finland's power play was 0-for-3.

Canada's next game is Wednesday versus Sweden, who opened with a 6-0 loss to defending champion United States. Hannah Brandt and Hilary Knight led the Americans with two goals apiece.

Schuler wants to see more hunger around the net from Canada when they face the Swedes.

Canada and the U.S. square off Friday to conclude the preliminary round. The top two teams in the round robin advance to Saturday's championship game.

In non-Olympic years, Canada's international games have been limited to the Four Nations and the women's world championship.

But Canada and the U.S. will meet in a two-game exhibition series in December. The first game is Dec. 17 in Plymouth, Mich., with a Canadian date and location yet to be announced.