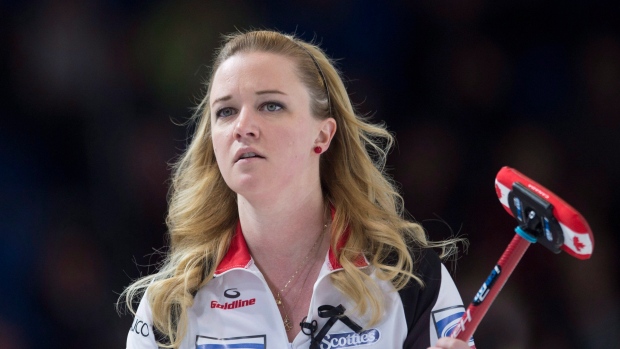 The win improved the Calgary-based team's record to 4-4 as it aims to avoid becoming the first Canadian rink to miss the playoffs at the women's worlds since 1999.

"It's a bit of a relief. That was a must-win game for us," said vice-skip Sarah Wilkes. "We know we have our backs against the wall now, and every game we have to come out like it's our last game and play as hard as we can. So this is a confidence-booster; that's how we're used to playing."

Canada, which lost both its games Tuesday, was in a three-way tie for sixth with Scotland and the Japan after Wednesday's draws. The top six teams in the 13-rink event make the playoffs.

"We needed a bounce-back," Carey said. "It was a tough day yesterday because we didn't feel like we deserved two losses, and that's a bit hard to park and move on. So it was big for us to come out like this today. The ice was tricky, but we were very calm about it. We were in a good place and did a good job of being patient and pulled one off."

Carey scored three on a draw in the ninth to wipe out a two-point deficit and then held on for the win against a Chinese team that entered the draw in a tie for first.

"I actually think we played the same as we did all day yesterday. We just got a couple breaks and we were able to take advantage of them (today)," Carey said. "I had to make a really scary open hit in the fourth end, where if I roll out, they get four or five, but other than that, it was a good battle — lots of good shots from both teams."

Stolen singles in the fifth and seventh ends gave Canada a 5-4 lead before China took its first lead of the game with an eighth-end deuce on a wonderful double-takeout from last-rock thrower Rui Wang.

Canada took advantage of a Wang miss in the ninth to score three and never gave China a legitimate shot at a game-tying two in the 10th.

"We got a little break in the ninth when she ticked on the guard and we got the three, and we were able to close it out after that," Carey said.

The game against China was Canada's lone contest on Wednesday.

In Wednesday's late draw, China lost its second match of the day, falling 9-8 to Switzerland in an extra end. The Swiss counted three in the ninth end, then posted two consecutive steals of one to pull out the comeback victory.

China, which opened the day tied for first place, fell into fourth at 6-3. Switzerland is alone in fifth at 5-3.

Sweden scored three points in the 10th end in a 9-7 win over the United States. The Swedes lead the standings at 7-1, followed by Russia at 7-2. Alina Kovaleva's Saint Petersburg rink posted a 7-4 win over Germany in Wednesday's late draw.