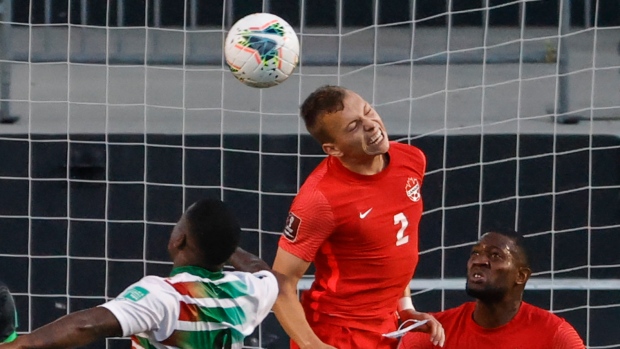 The 70th-ranked Canadian men can move into the so-called Octagonal, the eight-country final round in CONCACAF, with a win or draw against No. 83 Haiti on Tuesday at SeatGeek Stadium in Bridgeview, Ill. Canada took the upper hand in the second-round playoff with a 1-0 victory Saturday in Port-au-Prince.

The Canadian men haven't reached the final round of qualifying in the region that covers North and Central America and the Caribbean since 1996-97.

"When you put it in perspective like that, it's crazy. Because I was born in 1998," said Johnston. "So for me, I've never actually seen a Canada team make it this far, to that next stage."

Coach John Herdman said his players were excited as well as a little bit nervous "because they know they're on the cusp of something really important."

But he warned that the Haitians won't go quietly.

"We know that team, they have a response in them," he told reporters Monday evening. "They have a real response. And if they smell blood, they get after it. And they become a bit of juggernaut.

"So for us, we've got to be super professional. We've got to recognize they will have a response. We've got to match that intensity and then let our quality come through."

Should Canada get past Haiti. it will join Mexico, the U.S., Jamaica, Costa Rica and Honduras in the final qualifying round-robin. Likely El Salvador, which blanked St. Kitts and Nevis 4-0 in the first leg of their second-round playoff, and Panama or Curaçao (Panama won the first leg 2-1) will join them.

There is plenty at stake.

For Canada Soccer, making the Octagonal round means a higher visibility — attractive to sponsors — and the chance to add to its COVID-affected bottom line with seven home matches guaranteed and the hope that Canada will loosen pandemic-related restrictions come the fall to allow them to be staged north of the border.

For Herdman, making the Octagonal means meaningful games against the region's top teams, which translates into valuable experience for his young squad.

The big attraction, of course, is making Qatar 2022 which would be a huge boost ahead of co-hosting the 2026 World Cup. The Canadian men's lone World Cup appearance was 35 years ago.

"At the end of the day we know 2026 will happen, but 2022 is something that we're aiming for right now. That's where all of our focus is as a team, as a group," said Johnston, who plays his club football for Nashville SC. "We really want to push ourselves and get ourselves battle-tested. There's no better way to do that than play in those knockout games to get us to that Octagon."

While Johnston calls them "monster matches," he says the players see games like Tuesday's contest as more opportunity than pressure.

"From the outside looking in, there's probably more pressure from guys like you guys in the media, who expect like 'Wow, this is a really big thing in Canadian soccer to potentially make it here (to the final round).' But for us, as a younger group I'd say, obviously with some veteran leadership, we feel like this is a great opportunity. I don't think there's any added pressure just because we haven't been there in over 20 years."

Still, the 22-year-old Johnston, who was born in Vancouver and raised in Aurora, Ont., calls it the biggest game of his young career. "It's not even close," he said.

"This is the big one for us now. And hopefully we get over this hurdle. Then it will be on to the next. And each match after that will be the biggest match of my life again," he added. "That's national team football and that's how we love it."

Striker Lucas Cavallini says the Canadian team, which has won all five qualifying games to date, is growing together on the road to the Octagonal.

"We're forming that brotherhood," said the Vancouver Whitecap. "We have one more final, one step to go."

Conditions Tuesday should be better after the heat and sticky artificial turf in Haiti. Not to mention safer.

With travel advisories from governments and heath authorities warning against going to Haiti, the Canadian travelling party spent as little time as possible there. The team flew in Friday and left after the game Saturday.

While the Canadians didn't see much of Haiti other than the airport, hotel and stadium, Johnston said just looking out the window was instructive.

"You really realize how lucky we are as Canadians, as football players, that we get to experience the life that we live," said Johnston. "Just how lucky it is to be born in Canada to a degree, and the things that we take for granted when you go to places like this, that we see across CONCACAF.

"What we have in Canada is not normal. And we wish it was normal across the world. Yeah that trip was a bit of an eye-opener."

While the journey was short and the conditions difficult, Johnston said the team came away stronger.

"When we were out there on the field, you could see everyone was knackered, even in the warmup," he said. "The humidity's hitting, it's 30-something degrees (Celsius) out there and the turf is burning.

"It's one of those ones (where) you look around and go 'Hey, this is going to be a war.' So I think, as a group, we each looked at each other and said 'You know what? Let's pull through this one. It's not perfect conditions but this is what you've got to do. If you want to qualify for a World Cup, you need to go to these place and you need to get results.' So I was pretty proud of the group."

"Sure we would have liked more goals. But at the end of the day, keeping a clean sheet, getting an away goal to come back here in Chicago is never a bad thing at the same time," he added.

Taken 11th overall in the 2020 MLS SuperDraft, Johnston turned heads with his performance at fullback for Nashville. With Canada, he has slotted in seamlessly in a back three.