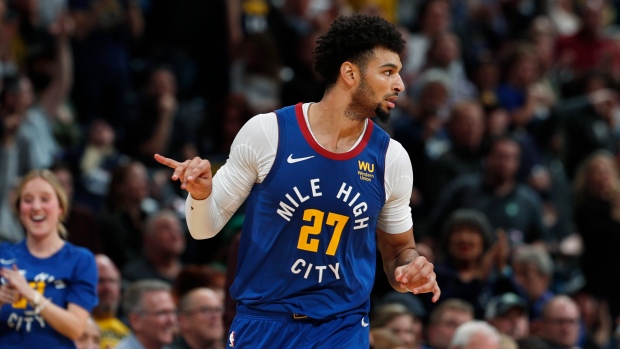 Canadian guard Jamal Murray was rewarded for his breakout season when the Denver Nuggets signed him to a lucrative max contract extension over the summer, but that deal came with expectations that he would make strides in defence and leadership to complement his offensive skills.

A comparison of Denver's last two home games against the Boston Celtics, almost one year apart, shows how Murray is justifying the Nuggets' five-year, US$170-million bet that he will evolve into the complete player they envision.

The Nuggets guard had the game of his life last November when he dropped a career-high 48 points — the most ever by a Canadian in a regular-season game — on the visiting Celtics. He also showed a lack of maturity, and invoked the ire of the Celtics, by launching a three-pointer at the buzzer in an effort to reach the 50-point mark.

The move angered Celtics point guard Kyrie Irving so much, he hurled Murray's game ball into the stands and described the offending shot with a mild expletive in a post-game interview.

A year later, Murray was instrumental in another home win over the Celtics. In an on-court interview after the game, Murray made a point of voicing his support for Boston guard Kemba Walker, who suffered a head injury during the game.

It was the type of gesture a veteran leader would make. It's also another indication that the fourth-year guard from Kitchener, Ont., is progressing from an offence-first shooter into a complete player and a positive locker room presence.

So far this season, Murray is averaging 18.9 points, five assists and 4.7 rebounds per game. Those numbers are slight improvements over last season, which was considered a breakout campaign. But Murray has been earning bigger plaudits from coach Michael Malone for bringing improved defence and leadership to the Nuggets, who brought a 12-3 record and a five-game winning streak into Tuesday's game against Washington.

Murray didn't put up gaudy numbers in Denver's 96-92 win over Boston on Friday, but he had a team-high 22 points with six rebounds, five assists and two steals. Eight of those points came in the final three minutes of a close game, including two free throws in the final second to put the game on ice.

Denver coach Michael Malone called the win an "ugly game," but praised the character of his team, and Murray in particular, for coming up with some big plays in the fourth quarter.

"Some of the big shots I mentioned were Jamal taking advantage of the moment, not being afraid of the moment," Malone said. "He made big shot after big shot, which was great to see."

Murray followed his clutch performance against Boston with 22 points, three assists, one steal and seven rebounds — which tied a season high — in Denver's 116-104 win over Phoenix on Sunday.

The biggest takeaway from Murray's impressive start to the season, however, is how he is contributing when he's not scoring. He shot 4-of-16 for 10 points in a 105-95 win over Houston last Wednesday, but kept the offence flowing with nine assists and was a ball hawk on defence with six steals.

Even in a forgettable four-point performance against Brooklyn earlier this month, he was part of the Nuggets' smothering defence that held Irving and the Nets to 32 second-half points in a 101-93 win. He also overcame his poor shooting performance quickly, putting up a season-high 39 points in a 131-114 road win over Memphis three days later.

Malone said he has talked with Murray about becoming a more complete player, and so far this season he is pleased with what he's seen.

"You can't allow your offence to dictate your defence, your rebounding, your playmaking. Because if you do that, now you're just a specialist."

The message has seemed to resonate with Murray, who said before the season that he wanted to take more accountability for the team this season.

"It's my job. I'm supposed to go out there, everyone looks to me," Murray said following a pre-season game against Portland. "I guess I didn't realize how guys really look to me on and off the court. They way I talk, what I do, what I say.

"I've always led by example, so its just transitioning to not just going out there and playing but talking. Talking in the huddles, talking in time outs, talking in practice, stopping practice, which coach gives me permission to do. Just being more mindful of taking more ownership of the team."

The 22-year-old Murray did just that after a 122-107 loss to the struggling New Orleans Pelicans early in the season dropped the Nuggets to 3-2. Murray "spoke to the team and said we needed to bring it, and then he set the tone," Denver guard/forward Torrey Craig told The Athletic.

The Nuggets responded by going 9-1 over their next 10 games.

BRINGING THE HEAT — Big man Kelly Olynyk has seen his playing time increase with the surging Miami Heat. The centre from Kamloops, B.C., was a force off the bench in a 117-100 win over Charlotte on Monday, with 15 points — including hitting four of five three-point attempts — 16 rebounds and two steals in 31 minutes. It was the second straight game Olynyk eclipsed the 30-minute mark.

CHECKING IN — Minnesota forward Andrew Wiggins of Vaughan, Ont., has scored over 20 points in each of his last three games after returning from a personal leave and an illness. ... Tristan Thompson of Brampton, Ont., came up big in Cleveland's 110-104 win over Portland on Saturday with 25 points, 10 rebounds and two steals. ... Montreal's Khem Birch was pressed into service when Orlando star centre Nikola Vucevic was injured in the Magic's game at Toronto last week. He has 12 points and four rebounds in 21 minutes in a losing cause.

KEEP AN EYE ON — Wiggins will take on fellow Canadians Dillon Brooks and Brandon Clarke when the Timberwolves host the Memphis Grizzlies on Sunday afternoon.

CanaDunks, a weekly notebook on Canadians in the NBA, is published every Tuesday