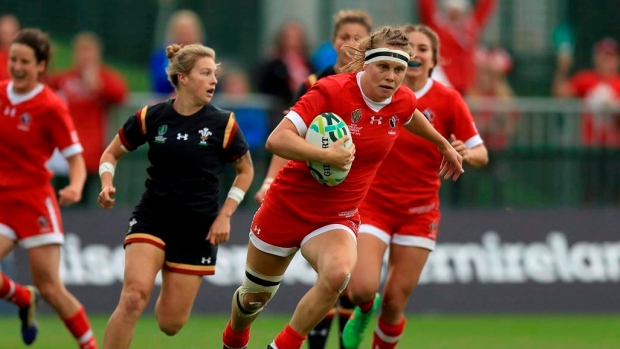 Canada won its first two matches at the season-ending Rugby Sevens Series stop in Biarritz, guaranteeing the squad a top-four finish in the series' overall standings.

Canada opened play Saturday with a 22-19 win over Spain, and followed with a 27-10 victory over Ireland.

The Canadians, who entered the tournament third overall, finished Saturday with a 27-14 loss to No. 4 Australia. But by advancing to Sunday's Cup quarterfinals, Canada ensured that it could not be caught in the standings by fifth-place France. Canada will play France in the Cup quarterfinals.

The Canadian women won bronze when sevens rugby made its Olympic debut at the 2016 Rio Games.

Ghislaine Landry scored a try in the second minute in the match against Spain. Brittany Benn, Bianca Farella and substitute Breanne Nicholas also scored as Canada withstood to late tries from the Spanish side.

Against Ireland, Canada faced an early deficit as the Irish scored two tries in the game's first four minutes. But Canada stormed back thanks to two tries each from Kaili Kukan and Farella and another from Benn.

Canada looked to make it three wins when Farella scored an early try against Australia. But the Aussies powered back thanks to three tries from Charlotte Caslick and two from Evania Pelite. Substitute Charity Williams had Canada's other try.