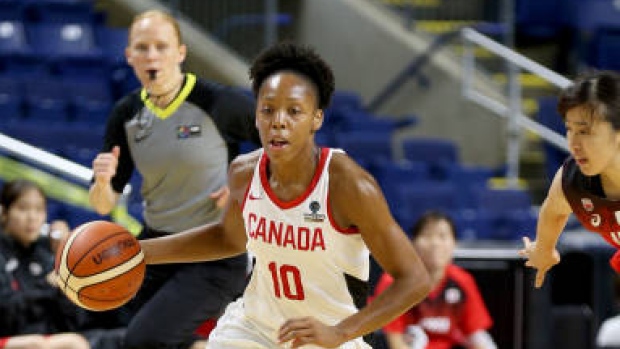 Nirra Fields scored 17 points, while Kayla Alexander had 11 points and seven rebounds as the Canadians held on to edge Brazil 71-67 on Sunday and improve to 2-0 at the FIBA AmeriCup, their first tournament in more than a year.

"That was such a great game for us, to challenge ourselves against a tough Brazil team," Thomaidis said. "I thought they did a great job taking us out of our things, it really forced us to get to a Plan B and we're not at that place right now where we're seamless, where they take away our first option we can get into our second one.

"I think we ground to a halt. That’ll be really good for us, we’ll learn from this and take it forward. . . this is a great learning opportunity."

The Canadians had opened the tournament with a 101-41 rout of the U.S. Virgin Islands, Canada's first game together since they clinched a Tokyo Olympic berth in February of 2020.

"I feel just excited and happy to be back as a group," said Alexander, a 6-4 forward from Milton, Ont. "It's been so long since we've been able to be on the court together, competing with one other, so I think there's a lot of excitement and joy there . . . Also just excited about the learning and the growing throughout these games. We're not where we want to be yet but I think we're continuously building to get to that point."

Sunday, the two undefeated teams played to a 21-21 tie to end the first quarter. Canada started to pull away and took a 45-37 lead into the halftime break, but Brazil rallied to tie it up late in the third and led 59-58 with one quarter left.

"I'm thankful that we had this experience because it showed us areas we need to improve upon and it was a challenge," Alexander said. "But challenges are fun, I feel like basketball is more exciting when you're being challenged and forced to find new ways to create, make things happen."

The Brazilians had cruised by El Salvador and Colombia in their first two games.

Canada plays El Salvador on Monday and Colombia on Tuesday. The top two teams from each group advance to the semifinals. The final is Saturday.

The Canadians are without WNBA players Natalie Achonwa, Kia Nurse and Bridget Carleton who will join the team in Tokyo.

Following the AmeriCup, the Canadian women will return to Tampa, Fla., to continue Olympic preparations. The women normally call Edmonton their home base, but couldn't gather there due to COVID-19 protocols and quarantine rules, and so are training out of the Toronto Raptors temporary home in Tampa.

This report by The Canadian Press was first published June 13, 2021.