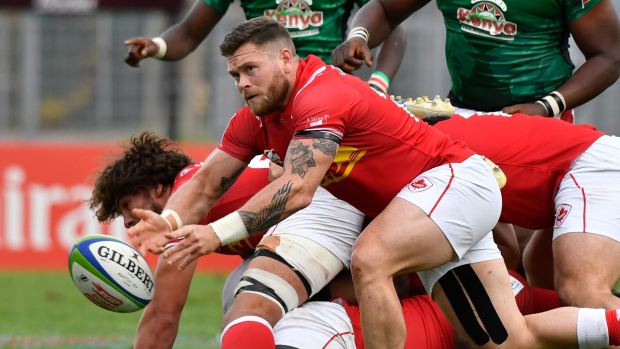 As Canada gets set to kick off against Italy at the Rugby World Cup, they’ll be fielding a roster that’s in better game shape than in years past.

That’s due, in part, to the Toronto Arrows.

While the world’s rugby powers have been able to use club teams as feeder systems, Canada hasn’t had that luxury. In the past, players would mostly play abroad, expected to be ready for the next international test period.

That changed in 2018 with the inaugural season of Major League Rugby, a professional rugby union league in North America that began with seven teams, including the New Orleans Gold and the Utah Warriors.

“The roster [in 2019] was 85 per cent Canadian,” Webb explained. “It’s important to have a lot of Canadian talent. We know that the talent is here, but the big problem in North America is that there hasn’t been professional rugby, so guys have had to go overseas to play. We just had to get the players in a daily training environment where they play lots of games.”

Jones was complimentary of the Arrows and MLR in the lead up to Japan, and it’s a relationship that’s been beneficial for both sides.

“We have a very supportive relationship with Rugby Canada,” Webb said. “We want to be able to develop Canadian players, and our ultimate goal is to be the destination of choice for the very best players. One of our goals is to make Canadian men’s national rugby more competitive and feed that team as much as we can.”

Having a club team on Canadian soil has already proved advantageous for both the players and Rugby Canada. The Arrows pride themselves on a league-low injury rate, and with most players remaining on the continent year round, it’s easy for Rugby Canada to check in on their health and progression.

Follow Team Canada's journey at the Rugby World Cup with TSN Direct, the exclusive streaming service from TSN. Stream every match, live and on demand, all tournament long! Subscribe Now >

It’s not only a big benefit to the national program, but Webb says the players recognize their opportunity as well.

“They love it. It’s every guy’s dream to play professionally, whatever sport it is,” he said. “They’re thrilled that they get the experience training and travelling at a high level, and they know that, nationally, the hard work is being noticed.”

The Arrows play a 16-game schedule in MLR, split evenly with eight games at home and eight on the road. Due to the potentially volatile weather conditions they could face when the season started in early January, Toronto’s eight road games were front-loaded before returning home at the beginning of April.

They finished 11-5 in the regular season, bowing out to eventual league champions Seattle Seawolves in the semi-finals.

But the impact the Arrows had on rugby in Canada in just one season was massive.

“This has been the missing link, certainly for men’s competitive rugby, at the highest level,” Webb explained. “To be able to provide that has been a real honour and pleasure for me, the other owners, and the staff. It’s not just about the Arrows being successful, but it’s about growing the game and making rugby successful in Canada.”

While it will take some time, the hope is that MLR will benefit both the United States and Canada when it comes to international rugby. It’s an advantage that countries like New Zealand, Australia, England, Ireland and others have enjoyed, using it to propel themselves to the top of the world rankings.

While it will be a monumental task, Webb sees a world where Canada can work their way back into the top 15.

“The reason we’ve slipped is that lack of a professional league. It’s much easier for our best players to play, and play consistently, without disrupting their lives,” he said. “To be able to grow the base of the sport, you’re growing the talent level of the sport. To be in a professional training environment, to play the amount of games that we’re playing, and to have the kind of recovery equipment we do just wasn’t available to everyone before.”

The rest of the Arrows will be tuning in while their teammates are overseas. And despite Canada looking up at two world-class nations in their pool, Webb knows the Arrows taking part in Japan will make Canada proud.

“I think it’s truly great that, for the first time, we’re sending a Canadian team that’s almost entirely composed of professional players – wherever they’re from,” he said. “It’s the beginning of a complete, professional era. We’re playing catch up as a country, but there’s a group of very committed people that want to see this happen. These guys deserve it and they’ve worked really hard. We’re thrilled for them and we know they’re going to make us proud over in Japan.”