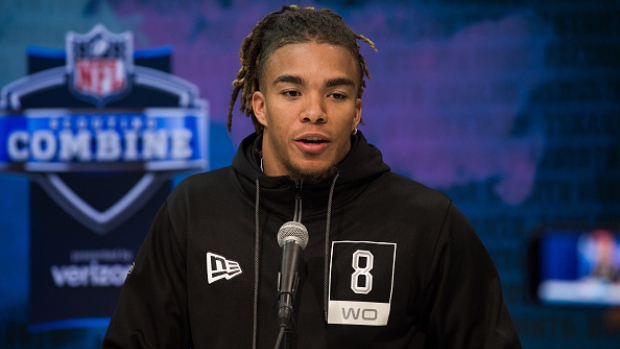 Former Notre Dame wide receiver Canadian Chase Claypool believes he can make a splash this week in Indianapolis in the marquee event of the 2020 NFL Scouting Combine.

On Tuesday, Claypool, who measured in at the combine as being six-foot-four and weighing 236 pounds, told reporters that he believes can put up a time of sub 4.3-seconds when he runs the 40-yard dash on Thursday.

"Yeah, that's what I've been saying," Claypool said when asked if he thinks he can run sub 4.3. "I've made dinner bets on it. I think I'm going to be getting some free dinners the next couple of weeks."

A 4.3 forty is considered to be an elite time for the test, as generally speaking only a small number of combine participants actually achieve the feat each year. Just 13 of the 300-plus players at last year's showcase were able to attain a sub-4.3 forty.

In addition to the 40-yard dash, Claypool, who is considered to be a big wide receiver, was also asked if teams have talked to him about potentially playing tight end in the NFL.

"No team directly has said we want you to do this or this,” Claypool said. “They kind of just make a comment on the weight and ask what I'm going to run. All the teams that I've sat down with have talked to me about special teams or receiver.

"I'm not the only receiver in the [NFL] that's my weight and my size. I think I'm going to try and model my game after those guys/ [Playing tight end] is something that I'm open to, in terms of playing different position on the field. I think that gives me more value and allows me to get on the field maybe sooner than later."

Claypool, who hails from Abbotsford, B.C., played four seasons at Notre Dame. In his final season at the school, Claypool had a breakout season, leading the Fighting Irish in receptions (66), receiving yards (1,037) and touchdowns (13).

Claypool, along with the other tight ends, quarterbacks and wide receiver attending the combine, will take the field for testing on Thursday.