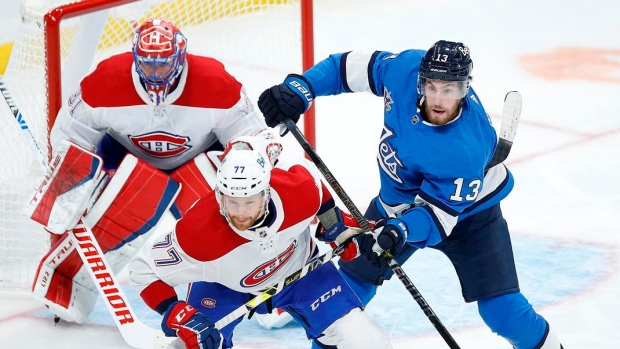 The federal government has waived its mandatory 14-day quarantine period for players acquired by Canadian NHL teams from U.S. clubs "under national interest grounds" ahead of the league's April 12 trade deadline.

Two sources told The Canadian Press players will now observe a seven-day quarantine upon arrival in the country and be subject to daily testing for COVID-19. Players will then be eligible to suit up for their new teams while continuing to undergo daily testing the following week.

The sources were granted anonymity because details of the exemption have not been made public.

Players entering Canada during the season previously had to observe the standard two-week quarantine period with the border closed to non-essential travel due to the pandemic.

The Public Health Agency of Canada said in a statement to The Canadian Press late Friday the five provinces with NHL teams — B.C., Alberta, Manitoba, Ontario and Quebec — have all "provided written commitment that they support the proposed risk mitigation measures from the NHL."

"The Public Health Agency of Canada was consulted on the NHL's plan and assessed it against public health criteria," the statement read. "With the support of provincial and local public health authorities, PHAC concluded that, if fully implemented, it offers robust measures to mitigate the risk of importation and spread of COVID-19 in Canada for the purposes of in-season additions."

The cut in quarantine time, which also applies to players called up from AHL teams south of the border, is a boost for Canada's seven NHL franchises ahead of the trade deadline. Acquiring a player from the U.S. and then immediately having him sit in a hotel for 14 days was far from ideal.

The regular season is currently scheduled to end May 10.

Staff and players arriving in Canada ahead of training camps prior to the league's 56-game season that started in January were subject to the same seven-day quarantine with additional testing.

But once the schedule got underway, players were back having to wait two weeks after crossing the border.

One example came when the Winnipeg Jets acquired centre Pierre-Luc Dubois from the Columbus Blue Jackets for forwards Patrik Laine and Jack Roslovic on Jan. 23. Dubois didn't debut with his new team until Feb. 11.

The NHL completed the 2019-20 season inside tightly controlled bubbles in Edmonton and Toronto, but the truncated pandemic campaign includes teams travelling between cities.

The league was forced to create a Canadian-based North Division because of the border restrictions. Players and staff are only allowed at airports, the team hotel and arena while on the road this season, while similar rules apply when at home.

The Montreal Canadiens had four of their games postponed this week after two players were added to the NHL's COVID-19 protocol list. General manager Marc Bergevin said Thursday one member of the team had a confirmed case of a variant.

The Canadiens acquired veteran centre Eric Staal from the Buffalo Sabres for two draft picks Friday. The 36-year-old would have had to quarantine two weeks under the previous rules, but will now only have to wait seven days.