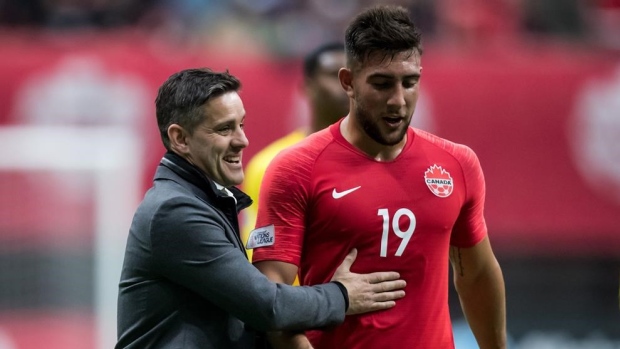 The Canadian men see their first action in more than a year Saturday when they take on the U.S. in a soccer scrimmage in Bradenton, Fla.

Both teams are holding camps at the IMG Center there.

Saturday's meeting is not considered an official match, given it will be in the form of two 70-minute scrimmages, allowing both coaches to dig deep into their squad. Because the camp does not fall in a FIFA international window, both sides do not have their full lineups.

Still, the camp marks the start of a busy year for Canada with World Cup and Olympic qualifying starting in March and the Gold Cup in July.

"It's huge," he added. "Guys need to step up their game. It's going to be a lot of international games and we have to be ready … We have to ready for whatever. Guys have to push themselves now more than ever, because this is do or die."

Saturday's scrimmage will see a lot of Canada's young talent in action.

"A lot of new faces," Cavallini said. "It's a great chance for the young talent to showcase their abilities, their willingness to be a part of this national team, to show that they're able to understand what the national team has to bring. And to understand how John wants us to perform.

"This is a good window for them … Just so they get a good sense of how Canada soccer is evolving, that we're no longer a joke and we're here to reach our objectives and have good results and hopefully qualify for a World Cup."

Cavallini had six goals in 18 games in his first season with the Whitecaps in 2020. The 28-year-old from Toronto has won 17 caps for Canada with 11 goals and one assist.

Cavallini elected to sit out the MLS is Back Tournament last summer for personal reasons. He had lost two family members to COVID-19.

"It is what it is nowadays so we've just got to cope with COVID and get around these things like we've been doing at this camp. We'll see how the year unfolds.".

Canada Soccer reports everyone fit for the weekend scrimmage, which essentially marks the camp's finale. That includes the unidentified player who had to self-isolate after testing positive upon arrival at camp."

"The team has had almost two full weeks preparation," Cavallini said of the buildup to the scrimmage. "The boys have been looking good, showing a lot of emotion, showing a lot of anxiousness just to play this game against the U.S. Obviously it's a really good matchup to play and we've been training hard, doing what John wants us to do and training as if we're going to play against the U.S. each day."

Fullback-midfielder Raheem Edwards has joined the Canadian camp ahead of the scrimmage. Formerly with Toronto, Montreal, Chicago and Minnesota, Edwards was selected by Los Angeles FC in the December re-entry draft.

This report by The Canadian Press was first published Jan. 21, 2021