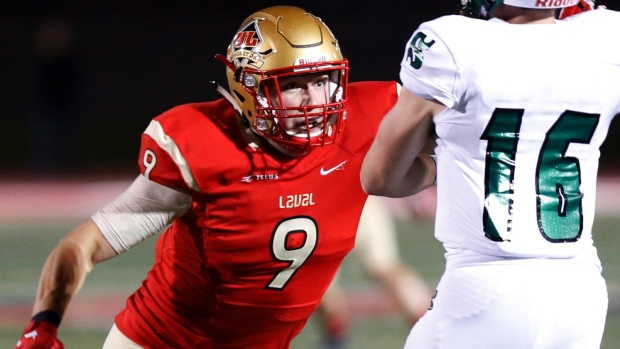 Canadian pass rusher Mathieu Betts has signed with the NFL's Chicago Bears as an undrafted free agent. The Bears signed Betts after the Laval University product went undrafted in the NFL Draft.

“I could not be more excited right now. I’m leaving Thursday for the rookie camp," Betts told Melnick in the Afternoon on TSN 690 in Montreal. After rookie mini-camp, Betts will attend the Bears' off-season training activities and then full training camp in the summer.

Betts, who played defensive end with Laval, will be asked to played outside linebacker in the Bears' 3-4 defensive system.

“It’s not really different from what I’ve been asked to do at Laval University," Betts said. "There are several differences but nothing that will impact my game a lot. In their system (3-4) it (outside linebacker) suits me better than the position I was playing at Laval. Basically the difference is I will be standing up right off the line of scrimmage instead of a three-point stance with my hand on the ground, prior to the snap."

While Betts said he'll still be rushing the passer and setting an edge as an outside linebacker with the Bears, he'll also be asked to do more in pass coverage in his new position.

“One thing that will be a bit different is I’ll be asked for more pass coverage, a thing that I’ve done at Laval, maybe not a lot but I’ve done it. There are all things that I’m comfortable doing.”